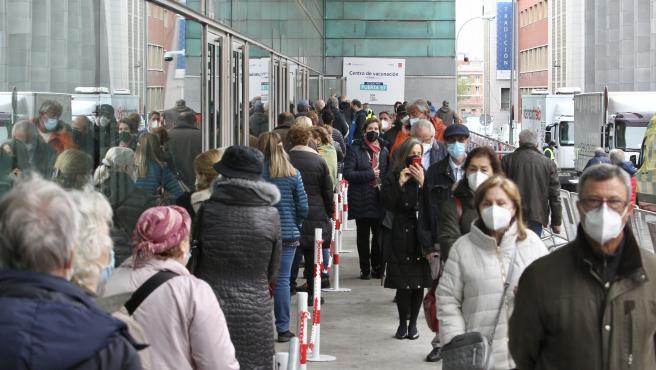 The administration of third doses against Covid among the population over 60 years of age advances unevenly between communities, but Galicia, the one that is more advanced, has urged this Monday that the Public Health Commission reach a consensus at its next meeting to lower the age for the third dose at fifty to be able to move on.

Before the general directors of Public Health make a political decision – predictably on Thursday – the experts from the Vaccine Commission must make a recommendation. For now, lowering the age for the booster dose is not on Wednesday’s agenda, but sources from this body acknowledge that if the issue is already on the table of politicians, it will end up being that way.

The question of opening one more age range -from 50 to 59 years- for the third dose was raised this Monday by the Galician Minister of Health, Julio García Comesaña , after an informative breakfast in Madrid in which he assured that Galicia is at about to finish giving third doses to its population over 60 years old. As he has said, there are only people left who for various reasons have not gone to the vaccination points and who are trying to “re-fish” through phone calls. It has predicted that Galicia will meet even earlier than expected the objective that the Ministry of Health and the communities set a few weeks ago, to have those over 60 years vaccinated before Christmas, who are the most vulnerable by age.

“We are going to propose that once the 60-year-old group is over, we have to continue below . Continue advancing since there are mass vaccination centers” and there are “sufficient doses,” García Comesaña said, referring to the debate that the Xunta will take. to the next Public Health Commission.

At the end of the afternoon of this Monday, the Ministry of Health offered for the first time data on how the administration of third doses is going among those over 60 years of age, also differentiating between those over 70 and in the range of 60 and 69 . The figures at the national level are lower than those of Galicia and other communities and indicate that 11 days after Christmas Eve, there are still 40.4% of those over 60 who do not have the third dose.

Specifically, 59.6% have it. Coverage increases notably if the population over 70 years of age is taken into account, which has been revaccinated for several months, reaching 77.8% , that is, 5.3 million people. It is much lower in the 60 to 69 age group, where it only reaches 35.7% , although they began to be revaccinated less than a month ago. That is to say, 1.8 million people of a group of which 5.3 million people are part.

There are differences between communities and, for example, the Valencian Community and Andalusia exceed the measure of 77% in those over 70 years of age with 78.3% and 79% respectively, while the Community of Madrid and Catalonia are two of the remaining below, with 67% and 69% respectively.

In this scenario, there are already communities like Galicia that ask to continue advancing in the next age group while the Health experts also take it for granted.

40 and up
The sources refer to opening the group from 50 to 59 years instead of expanding it even more, from 40 years onwards, although this is the priority to puncture third doses that the European Commission has indicated.

“Party by party”, recommend sources close to the Conference, who recall that at the moment there are “many cauldrons in the fire”, referring to the fact that it is still necessary to continue putting third doses those over 60 who still do not have it and This Wednesday the start of the administration of the first doses to children from 5 to 11 years will be added. If Galicia’s request to start with the 50-59 age range is successful, this group will join the population to start vaccinating or continue vaccinating throughout the month of December.

In addition, for the moment the Spanish health authorities have not yet resolved the recommendation made last week by the European Medicines Agency (EMA) to cut the time between the second and third doses to three months, so that this is administered before.

At the moment, the interval is six months , so that the majority of the Spanish population in quarantine will meet that period between the end of December and January. With this scheme, Spain would still have a month to finish vaccinating those over 60 years of age, starting with those over 50 -as long as they have not already been revaccinated, because part of this group received the Janssen single-dose vaccine – and with the children , before entering to put third doses to the group between 40 and 49 years.