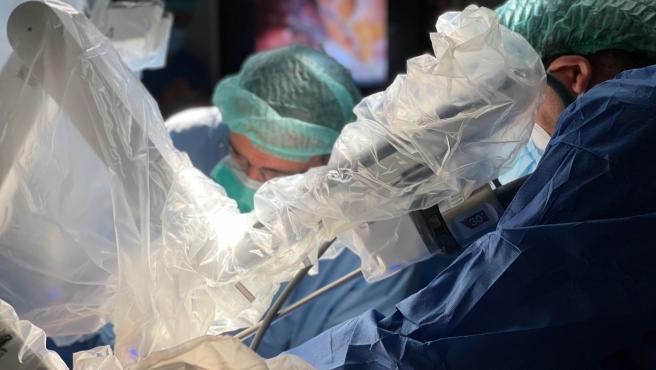 New milestone in Spanish surgery, and twice. The Thoracic Surgery Service of the Hospital de Bellvitge de L’Hospitalet de Llobregat (Barcelona) has carried out for the first time in the world a successful excision ( extraction ) of the first rib using robotic surgery with a single incision. This technique was also created by the Galician surgeon Diego González Riva s, and allows safer and less invasive procedures.

As reported by the hospital, the patient suffered compression in the intervened area ( costoclavicular syndrome ) that caused venous thrombosis and other serious vascular affectations and limited the mobility of her arm.

Although it is not the first time that an exeresis of the first rib has been done using robotic surgery, this has been the first time in the world in which, in addition, it is done through a single incision ( uniportal surgery ), when it is usually intervention is carried out through multiple incisions.

A successful technique created by a Galician surgeon
The uniportal approach technique has been developed worldwide by the Galician surgeon Diego González Rivas . The Uniportal VATS technique is a minimally invasive form of thoracic surgery . Thanks to it, the patient is operated through a single incision, avoiding the two or three incisions that used to be made to date.

“We make a single incision of two or three centimeters , and there we put all the instruments, a video camera and operate. In 10 years, this technique has spread throughout the world”, as Diego González Rivas himself points out in an interview with 20 minutes.

In addition, he has now adapted the technique to a robot, known as the Da Vinci robot , which can be operated with a single robotic arm. Now, it has been Anna Ureña who has practiced this pioneering operation that “adds the advantages of robotics with the advantages of surgery through a single incision, thus minimizing the risk of complications and allowing a faster recovery of the patient” , the surgeon explained.

The first program in robotic lung surgery for public health in Spain began in 2017 at the Joan XXIII Hospital in Tarragona, which is part of a Unified Service with the Bellvitge Hospital.

Last November, the Bellvitge Hospital reached the 200th thoracic robotic intervention after a rapid development of this program, which has positioned it as one of the leading and benchmark centers in Spain in this field.

The surgeons at the Hospital de Bellvitge have applied the robotic system to all the most common interventions of the lung and mediastinum (area between the lungs), most of them oncological interventions .

According to specialists, the use of the robot allows surgeons better visibility, make more precise movements and practice fewer and smaller incisions, advantages that translate into fewer complications, more comfort for the patient and a reduction in hospital stay.

The head of the Thoracic Surgery Service of the Hospital de Bellvitge, Ignacio Escobar, has highlighted: “Our specialty has undergone a very important evolution, since we have gone from performing, not many years ago, the majority of interventions for open surgery to performing a very extensive use of minimally invasive surgery, first with the advent of videothoracoscopy and, later, with robotic surgery “.

Bellvitge Hospital has two robotic operating rooms with the Da Vinci system, where, apart from thoracic surgery, they carry out urology, gynecology, general and digestive surgery, oral and maxillofacial surgery, and otorhinolaryngology.

This experience in robotic surgery has allowed the Bellvitge Hospital to launch with the University of Barcelona and ABEX Excelencia Robótica the first chair of robotic surgery in Catalonia and the second in Spain, headed by thoracic surgeon Ricard Ramos.