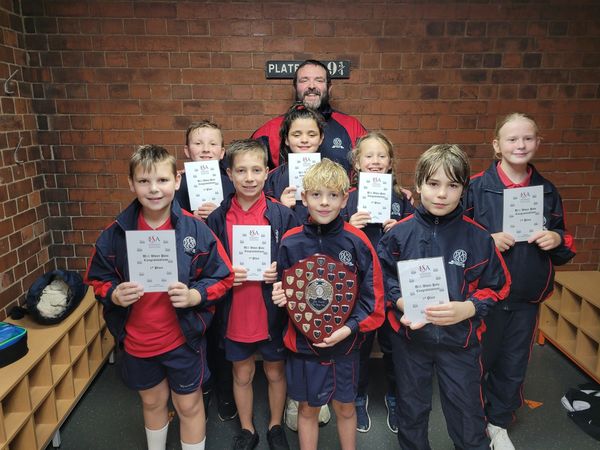 The annual event, which is hosted by Beech House School happened at Castleton Baths in Rochdale. It saw schools from across the North of England compete for the coveted title of “champions,” which the Prenton Prep team was delighted to clinch following a series of intense and nail-biting matches.

Having previously entered each year since the competition’s inception in 2008, the school is delighted to have taken home gold after winning the title on two previous occasions but missing out on many occasions in recent years.

Mike Jones, Headteacher at Prenton Prep, commented: “We’re really proud of the team, who have shown that hard work will always pay off. They were ecstatic when they won that final match, and it was a moment they will remember forever!

“It was a tough journey to the top at times, with the team finishing second in the group stage, and facing stiff opposition in the semi-final and final, but they showed grit, determination, and immense resilience to come out on top in the end.

“The atmosphere was incredible across all school teams, with the children showing fantastic sportsmanship. After each match, they would congratulate their competitors regardless of the score line, and it was heart-warming to see the passion for the sport that everyone who came together on the day exemplified.”

Prenton’s team was made up of both girls and boys from Years five and six. The equivalent U9 competition (for Years 3 & 4) is planned to take place later in the year.

Mike added: “We want our students to become well-rounded individuals, and sport plays a crucial part in this process. A varied curriculum is crucial in enabling all children to shine, be it academically, in the arts or through sporting prowess such as that shown on this particular occasion.

“We provide our children with the best sporting facilities on the Wirral, with access to local venues such as Prenton Tennis Club, The Oval, Europa Swimming Pool and Leasowe Recreational Centre. We also have strong relationships with the football, swimming, rugby and tennis clubs in the area.

“Our aim is to inspire a love for sports in school and enable pupils to have the opportunity to develop this passion further in their own time as they grow and develop.”

Prenton Prep. offers a wide range of sports teams, including cross-country, football, netball, cricket, basketball, and athletics in addition to water polo. The biggest, and most successful, of these, is swimming, with many pupils qualifying for the ISA National Finals at the London 2012 Olympic Pool, often bringing back numerous medals to add to the school’s burgeoning collection.