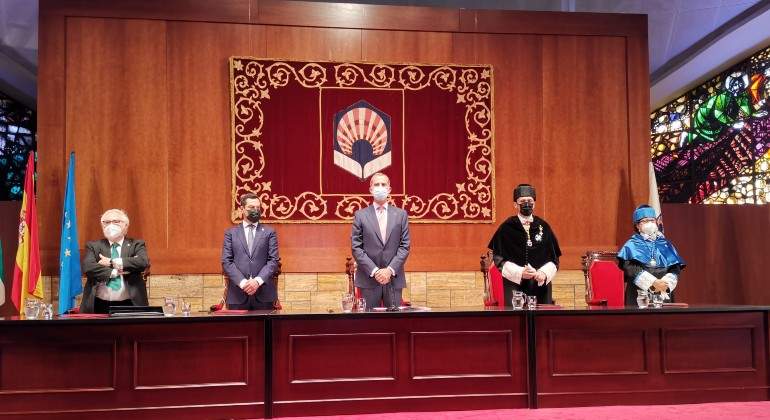 The president of Crue Spanish Universities and rector of the University of Córdoba, José Carlos Gómez Villamandos, has demanded from the Government, in the Official Opening Act of the university course, that the future laws of Universities and Science really address the structural changes that the university institutions to increase their competitiveness and service to society. “They must be maintained over time beyond the recovery funds of the European Union,” he asserted.

The event, chaired by King Felipe VI, was held in the Juan XXIII Assembly Hall of the Rabanales Campus of the University of Córdoba, which commemorates its 50th anniversary. The president of the Junta de Andalucía, Juan Manuel Moreno, and the minister of Universities, Manuel Castells, have participated in this academic celebration, whose inaugural lecture was given by the professor of Genetics of the Faculty of Sciences, Mª Teresa Roldán, with the title «DNA repair. Between the stability of the genome and the plasticity of the epigenome ”.

During his speech, Gómez Villamandos stressed the desire of the rectors and rectors to achieve a University “strong, excellent, adapted to the present and prepared to know how to adapt to a fast, liquid and extraordinarily demanding future” and thanked Minister Castells for his willingness to the dialogue, while Crue has extended his hand to reach the maximum consensus in the process of drawing up the future Organic Law of the University System (LOSU), which is in the preliminary draft phase.

Regarding the latter, the also rector of the University of Córdoba has indicated the “essential lines” that, in Crue’s opinion, the next regulations for universities should contemplate: adequate funding, greater university autonomy to attract and retain talent and a framework that gives certainty and encourages recognition for university personnel. “And all this associated with an accountability system based primarily on results,” he added.

Spain, Gómez Villamandos has said, “cannot bet everything on sectors with productive models that do not give more of themselves or are unsustainable.” And he stressed that “the change and diversification of the production model go through research and innovation.”

Finally, the president of Crue thanked the King for his presence at this solemn act and his “constant support for the University and Science . ” He also celebrated the “commitment and capacity” of the university community, despite the circumstances of the pandemic, and welcomed the student body: “We owe it to him, he is building our future.”

“The importance of Science, beyond the health context”
For his part, Felipe VI stressed that the Spanish University “faces an immediate challenge to improve the quality of the system” with the new regulatory framework and has listed several of the “tasks” it faces: its consolidation as an “effective instrument promotion and individual progress “; its internationalization, through academic and research cooperation and collaboration with other foreign institutions, and the “enhancement” of its research capacity and knowledge transfer from universities.

Regarding the latter, the monarch has stressed the important role that Science and the scientific community have had during the pandemic and has stressed that the recognition of the “extraordinary work done” must, in his opinion, give way to a stage in which “The importance of Science is maintained regardless of the health context.” In this sense, he indicated that it is “urgent” for Spain to prepare “more and better” to face the new health and environmental challenges.

The King wanted the course to be accompanied by “important successes” for the University System as a whole and for it to recover full presence, “a characteristic attribute of teaching and of most of the university experience.”

Minister Manuel Castells has indicated during his speech that the Government will put “all its efforts” to serve the entire university community, “a decisive actor in the modernization of the country” and in the “affirmation of social justice”, which, as indicated, “ensures coexistence.” Finally, he pointed out that this project “should include all the institutions and representatives of society.”