Manolo Blahnik turns 50 and gives us his virtual museum 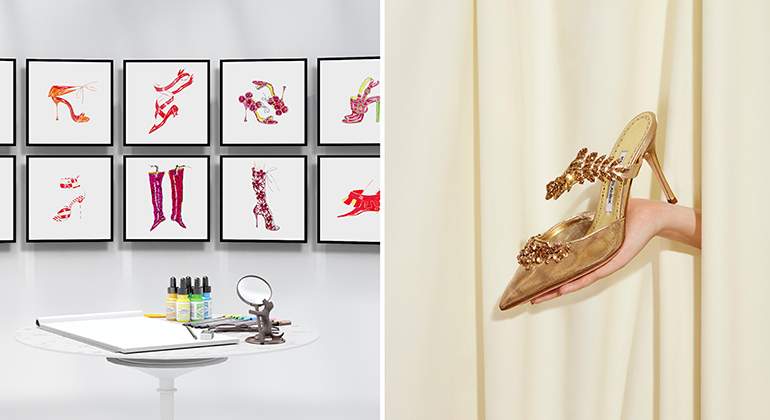 The designer celebrates five decades of his legendary eponymous shoe brand by opening the archives and sharing his prolific legacy in his virtual museum ‘A New Way of Walking’. And launching a ‘gold’ capsule collection.

Manolo Blahnik has never been very interested in fashion. At least that’s what he confessed a few years ago to ‘Vanity Fair’ journalist John Heilpern. But he has always had a fascination for art, for creativity, for crafts. And although nothing in his first years of life linked him to the world of fashion and design, he keeps in his memory the memory of his mother making his own espadrilles. In his house ?? like a real treasure ??, he still keeps a couple of pairs.

As a young man he settled in Geneva to study international law. But the city, cosmopolitan, brimming with quiet luxury, captivated him. Art and literature replaced law, and from Geneva it passed to Paris. There he was studying art and set design when a friend of his circle, named Paloma Picasso, introduced him to Diana Vreeland, the legendary editor of ‘Vogue USA’, then director of the Met Costume Institute.

She was fascinated by the sketch made by a young student for a performance of ‘A Midsummer Night’s Dream’. That’s where it all started. A year later, in 1970, he was already settled in London, informally familiarizing himself with the world of shoemaking and design. And a year later, he created his first pair of shoes for the British designer Ossie Clark’s show and opened his legendary store on Old Church Street in London. The rest is history.

‘Spotlight on Pearla’, an unpublished sketch from 1988 for Bergdorf Goodman. ‘Padolino’ designed exclusively for the opening of the designer’s store at the Palais Royal in Paris.

Museum shoes
His shoes are literally museum pieces, and he now celebrates 50 years of creation by opening his treasured personal archives in his two adjoining Victorian houses in Bath, which house his impressive shoe collection, close to 30,000 pairs of ‘Manolos’ prototypes, and the sketches of their designs.

Each and every one of the thousands that he has designed are unique, and all are a reflection of his life and his passions. Many of his shoes are inspired by plant forms, a permanent tribute to the exuberant landscape of his land, the island of La Palma. In others he has turned his passion for literature (‘Madamme Bovary’, ‘El Gatopardo’) and architecture. His Josefa design is inspired by his admired Zaha Hadid.

The interactive exhibition is carried out through five virtual rooms that make up ‘The Manolo Blahnik Archive: A New Way of Waking’: ‘The Palette’, ‘The 70’s’,’ Friendships’, ‘The Gold Room’ and ‘Our Family ‘, where she exhibits her sketches in thematic collections through the story line of curator and curator Judith Clarck.

She has also created Gold, a brilliant capsule collection of 19 pairs of gold-toned shoes, including mules , pumps , boots, flats and her signature high-heeled shoes, and in limited-edition packaging.