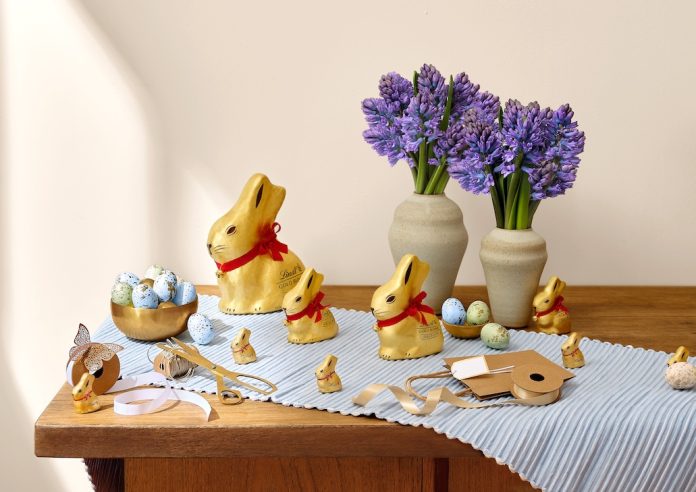 It’s a remarkable 70 years since a Lindt Master Chocolatier crafted the first Lindt GOLD BUNNY. With its golden coat and little bell tied with red ribbon, the Lindt GOLD BUNNY is now iconic worldwide, heralding spring – no Easter egg hunt is complete without one!

To celebrate this momentous occasion Lindt Chocolate shops and www.lindt.co.uk/shop is offering an exclusive Lindt GOLD BUNNY 500g in a recyclable card carrier this Easter – an impressive gift for a loved one. RRP £20.00

In addition to this exclusive in-store and online edition, the original Lindt GOLD BUNNY is available in five other sizes from various popular grocery retailers, Lindt Chocolate shops and www.lindt.co.uk/shop: 10g, 50g, 100g, 200g and 1kg. The smallest ones are perfect for decorating tables and Easter baskets whilst the largest 1kg bunny is the ultimate showstopper. The 1kg Lindt GOLD BUNNY is entirely wrapped by hand before being hand-polished and finished with a beautiful red bow.

Around 150 million Lindt GOLD BUNNY figures are produced every year in over 50 countries around the world. If you were to line them up nose to tail, they would span the distance from Lindt’s headquarters in Kilchberg, Switzerland to San Diego, California – that’s 9,800 kilometres!

The history of the Lindt GOLD BUNNY

One Easter the young daughter of a Lindt Master Chocolatier spotted a bunny in the long grass as the family was having a traditional Easter brunch. Excitedly she asked if she could go outside to play with it. Her father consented but as she ran to the door, the bunny promptly vanished into the bushes with a single flash of its tail.

For days, she was heartbroken. Her father thought long and hard how he could cheer her up before alighting on the perfect idea. He decided to craft a bunny so she could always find her little friend: the Lindt GOLD BUNNY was born. Every year after that, his daughter looked forward to hunting for her little Lindt GOLD BUNNY in the garden with family.

The first Lindt GOLD BUNNY was created in 1952. Thanks to Rodolphe Lindt and his conching machine, chocolate could be melted down until smooth enough to coat moulds of any shape, ready to create hollow chocolate figures – like the silky smooth and indulgent chocolate bunny. The chocolate bunnies became an instant hit in Germany – but it took a while before they hopped across the border into Switzerland and Austria before captivating the rest of the world.

The Lindt GOLD BUNNY made it to Latin America for Easter in 2002, before hopping onwards to Russia and Hong Kong in 2004. After that, it arrived in the Far East in 2007.

Crafted from the Heart

At Lindt each creation is crafted with precision, passion and care. From start to finish, it takes about an hour to bring a Lindt GOLD BUNNY to life. After coating a mould with their fine chocolate, the bunnies are left to cool at optimum temperature to attain the perfect sheen and crisp snap. Each bunny is then carefully wrapped in its signature gold foil and polished by the gloved hands of a Lindt Master Chocolatier. As a final loving touch, each Lindt GOLD BUNNY has a red ribbon and bell tied with a bow.

To Suit Every Taste

Since the original milk chocolate Lindt GOLD BUNNY proved such a success, Lindt Master Chocolatiers have conjured up three other flavours to choose from: dark, white and hazelnut chocolate. Each flavour proudly displays their own-coloured ribbon: look for white ribbons if you’re craving white chocolate, brown ribbons for the more robust flavour of dark chocolate and green for the added crunch of hazelnut.

Today the Lindt GOLD BUNNY is recognisable all over the world. Since its beginnings in 1952, the appearance of the Lindt GOLD BUNNY has weathered the years with grace and stayed close to its timeless original style. However, in 2015, Lindt released a special edition Lindt GOLD BUNNY wrapped in leopard and zebra print foil. These were followed by other limited-edition prints showcasing flowers. The Lindt Master Chocolatiers are always thinking of new ways to surprise.