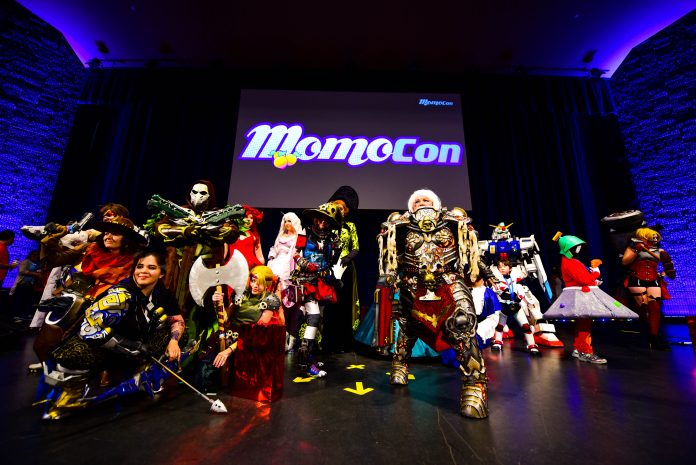 MomoCon 2022 made a killer comeback to in-person events after a two-year hiatus, hosting a record-breaking 42,000 gamers, animation fans, and cosplayers in the Georgia World Congress Center during May 26-29, 2022.

The four-day event featured many special guests including Charles Martinet (the iconic voice of Mario and Luigi brothers since 1992), Steve Downes (Halo’s Master Chief), the voices behind Avatar: The Last Airbender in a packed auditorium with more than 2,000 guests, gaming tournaments, wrestling matches, melodic tunes in the Disney Singing Contest Finale, indie game showcases, and more.

Many special guests helped make this record possible, as the four-day event featured many luminaries from the gaming and animation communities. Charles Martinet, the voice of Mario and Luigi since 1992, hosted a panel where fans got to see the voice behind two of gaming’s most iconic characters. Fans also got to meet Steve Downes (Halo’s Master Chief) and Jen Taylor (Halo’s Cortana in the games and TV series, RWBY’s Salem), and more.

Fans of both western and eastern animation got to meet some of the talent behind their favorite series. The voices of Avatar: The Last Airbender  brought more than 2,000 fans together to celebrate the franchise ahead of the reveal of the three upcoming films. Greg Baldwin also hosted his own panel, “Tea with Uncle Iroh”, welcoming another 2,000 excited fans ready to get some one-on-one time with their beloved Uncle.

Fans also got to hear from and take part in Q&A sessions with cast members from beloved series like My Hero Academia, Teen Titans, Samurai Jack, and more. Attendees also had the chance to meet Bill Farmer, the iconic voice of Disney’s Goofy since 1987.

“It was amazing being able to bring back MomoCon and have such a tremendous turnout,” said Jess Merriman, co-founder of MomoCon. “Seeing everyone apart of our tight-knit community have the opportunity to reconnect in person reminded us why we are so passionate about MomoCon. We’re looking forward to welcoming everyone back in 2023 and expanding to even greater horizons!”