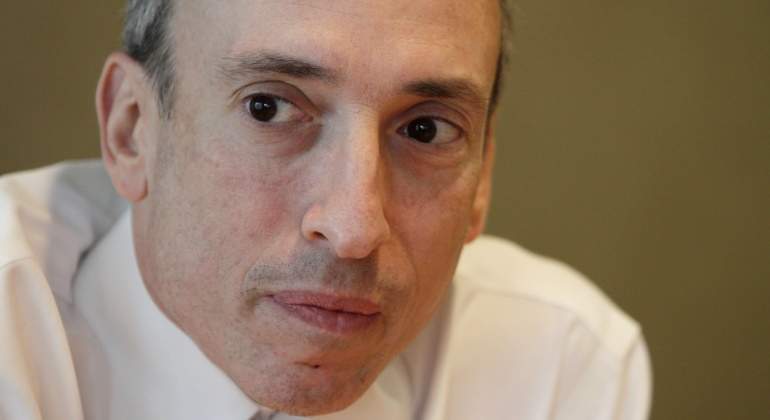 The new talk of the Washington, Wall Street and Silicon Valley offices is playing guess what the chairman of the Securities and Exchange Commission (SEC), Gary Gensler, is planning to do with cryptocurrencies. Industry lobbyists tune in to their televisions when he testifies before Congress.

Lawyers analyze their speeches word for word. Goldman Sachs wealth advisers spent 29 hours listening to his classes in the ‘Blockchain and Money’ course he developed at the Massachusetts Institute of Technology. And they are not the only ones: the videos of the lessons already add up to millions of reproductions, something that surprises even Gensler.

In his first extensive interview on the digital money craze with the agency Bloomberg, Gensler said he feels a “deep interest in the subject”, but that does not mean that he is willing to keep his agency’s intervention in the market to a minimum. , as many enthusiasts would like to see.

For years, all US institutions have debated how best to respond to a market that has reached a paper value of $ 1.6 trillion, mostly unregulated, and has explosive growth and wild price swings as its main features.

Gensler is contemplating a robust supervisory regime, focused on establishing safeguards for the millions of investors who have spent years investing their savings in these ‘tokens’. “I am neutral with respect to technology, I even admit myself intrigued by it, I spent three years teaching it, leaning on it.

But I am not neutral about investor protection,” says Gensler, who will give a speech on crypto at the Forum on Tuesday. from Aspen Security. Forum. “If anyone wants to speculate, that is their choice, but we have a role as a nation to protect those investors against fraud.”

Gensler has asked Congress to pass a law to give the agency specific legal authority to oversee crypto exchanges, but says the SEC’s powers are already broad enough to be able to enter this world. There has been a lot of debate over the years about what types of digital assets fall within the purview of the SEC.

Some, like bitcoin, which act like currencies, are considered ‘commodities’, not securities. But there are thousands of cryptocurrencies, with very different uses, and Gensler believes that most are unregistered securities that must comply with SEC rules.

In his opinion, technology is behind the economic progress of humanity throughout history, and he believes that cryptocurrencies can have a similar utility today, but only as long as there is strict and thoughtful regulation.

For example, remember that the auto industry didn’t fully take off until governments established common driving rules. Speed ​​limits and traffic lights provided public safety, but also helped cars become widespread. “Only when technologies are given order, security and consistency, with broad but strict regulations, is it when they become popular,” he says.

Gensler doesn’t know how long it might take for the SEC to get its grip on this universe. The agency has a to-do list in the stock markets, with 49 issues of all kinds to resolve before turning to cryptocurrencies. On the list, ‘meme’ stocks, like GameStop, or the outbreak of family investment firm Archegos.

The SEC is also working to impose new rules for companies to disclose their carbon emissions and other environmental risks, a priority of the Joe Biden administration.

Behind the scenes, Gensler has lobbied agency members to discuss a number of possible policy changes. At the moment there are at least seven SEC initiatives that analyze different cryptocurrency problems: initial coin offerings (ICOs), exchange houses, crypto lending platforms, decentralized finance, ‘stablecoins’ – with the controversial tether at the helm -, escrow funds and ETFs, and other funds of these currencies.

Gensler says he believes that regulating exchanges is perhaps the easiest way for the government to quickly control the trading of digital tokens. But he is also concerned about new ways people are getting into cryptocurrencies, such as peer-to-peer lending on so-called decentralized finance platforms (DeFi).

If companies are promising minimum guaranteed interest on cryptocurrency investments, Gensler says, that could put the loans under SEC supervision. Platforms that pool digital assets could be seen as similar to mutual funds, which could allow the SEC to regulate them.

Gensler was chairman of the Commodity Futures Trading Commission (CFTC) during the Obama administration, where he was responsible for bringing federal oversight to the huge derivatives market known as swaps after the financial crisis.

Patrick McCarty, a professor who teaches cryptocurrency classes at Georgetown University School of Law, says Gensler’s familiarity with digital assets means he will give the industry a “fair trial,” though it will likely disappoint many advocates. . “When crypto fans say they want legal certainty, they don’t mean it. What they really want is not to be regulated,” says McCarty. “That has never been Gary’s point of view.”