History Of San Vito Dance, The Strange Disease That Made The Sick Dance 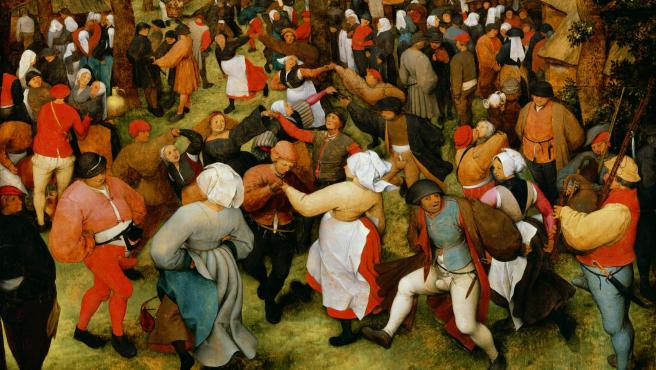 The chronicles that have come down to us from the end of the Middle Ages in central Europe tell a strange and curious story. For no apparent reason, suddenly, groups of up to thousands of people flooded the streets of any city and danced uncontrollably. At the time, the strange phenomenon was called the St. Vitus dance , and it was viewed with fear and horror.

Fight fire with fire
Imagine a nice morning in July. It is the year 1518, and we are in Strasbourg. We look out the window of our home to appreciate the mild climate … and suddenly something catches our attention. The street is full of people dancing , uncoordinated and without any music that we can clearly appreciate.

The dance epidemic of 1518 is by no means the first that we have evidence of, but it is one of the best documented. Apparently, says the doctor Paracelsus, it began with a single woman, one Frau Troffea, and ended with hundreds of people dancing to death , presumably from heart attacks, strokes or sheer exhaustion.

The most ironic thing is that, according to the historian Rober E. Bartholomew in his book Little Green Men, Meowing Nuns and Head-Hunting Panics , the reaction of the authorities was to hire musicians to play for the sick , believing that encouraging them to continue dancing it would be a good solution.

The curse of a saint
The historian John Weller describes in an article published in The Lancet that the dancers, without ceasing for a moment their tireless dance, screamed in pain , asked for help and expressed immense horror. The scenario, probably traumatic for all the spectators, led many to believe that these epidemics were the result of divine punishment.

Specifically, the most common was to attribute the evil to a curse launched by Saint Vitus , a young martyr from the third century who died submerged in a cauldron of boiling oil, courtesy of the then emperor of Rome, Diocletian. At other times, Saint John the Baptist was blamed.

Be that as it may, the fact is that these explanations caused many people, especially some who managed to recover after an outbreak, undertake prayers and pilgrimages to the places consecrated to these two religious figures.

What actually happened?
For some reason, these outbreaks stopped abruptly in the 17th century, and never returned. Fortunately, they had been relevant and frequent enough that we now have abundant documentation of the time.

Thanks to the scientific and medical knowledge that the human species has acquired since then, over time scholars have been able to agree that they disagree. The truth is that there is no clear explanation to the San Vito dance, but there are several theories.

One of the best known is that it could all be reduced to nothing more and nothing less than epic LSD communal trips . As absurd as it sounds, this hypothesis has some solid points, since LSD is obtained from a fungus that affects rye (one of the staple foods in that place and at that time), ergot. In fact, outbreaks of ergotism (the name given to poisoning by this fungus) were relatively frequent in the Middle Ages, when people ate bread made with this contaminated cereal.

In contrast, lysergic acid poisoning does not explain many of the symptoms, their duration, or the fact that they were communal.

The same occurs with explanations that link the mysterious evil to different organic diseases such as encephalitis, ataxia, epilepsy or typhus.

Also, there are those who propose that it could be a mass sociogenic disease, a mental disorder that is spread by imitation. In other words, the dance of San Vito would be, according to this idea, an example of mass hysteria. It is a controversial concept in psychiatry , but those who defend this thesis argue that it was due to the emotional weight of the rampant misery, disease and death at the time, correctly pointing out that these outbreaks tended to coincide with famines, epidemics and other moments dramatic.

We will probably never know for sure , but the truth is that the San Vito dance will always remain a sinister and colorful note in human history.