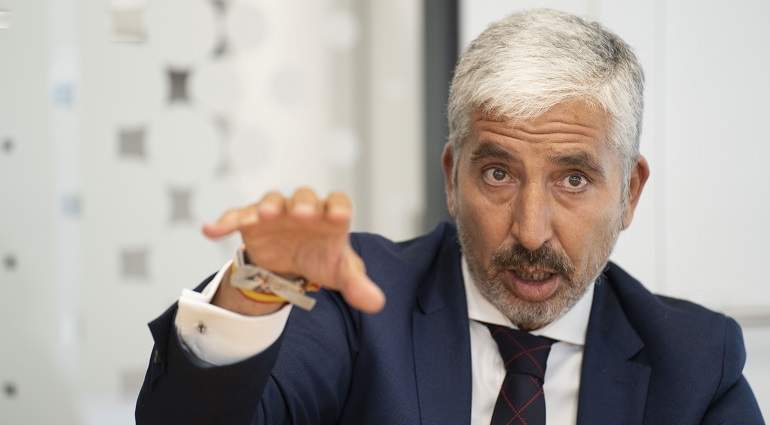 On September 29, Línea Directa will be five months after its debut on the stock market , after the listing by Bankinter. Since then it has accumulated a revaluation of 43% compared to the average of a sector that remains at the same levels at which it was trading then. Carlos Rodríguez, financial director of the insurer, recognizes that liquidity is limited and is the consequence of very loyal shareholders who have not wanted to sell since their debut -55,000 shareholders-.

He defines the company as a “different animal” in Spain, with a very profitable business model, with an ROE of 35% – triple that of the national listed companies – and which has already made a declaration of intent with the distribution in July of its first dividend: the priority is to repay the shareholder.

To what do you attribute the good performance in the market these five months?

From the first moment of the IPO, and even removing the first days [of greater revaluation], the market has considered Línea Directa a different insurance company, probably it has understood that the initial valuation of 1,430 million euros was somewhat low . Also, the dividend we paid in July was quite high. Long-term funds have also entered.

Línea Directa is a single-country company, almost a single product (cars) and trades at a profit multiplier that is double that of Mapfre (about 15 times the net result). How is this premium justified?

Those who know about this say that Línea Directa is a different animal in the Spanish insurance sector. Everyone refers it much more to the British or Nordic market. When you compare the multiples of Línea Directa with those countries, you are more attached to them. That has always been the big difference.

Even if this estimated growth in profits is not seen – some 118 million euros are expected in 2021 and 2022 – should we consider that Línea Directa is a growth value?

I think so. We must isolate the year 2020 and part of 2021. The situation that we are seeing in the sector is of a lot of oxygen for the part below the income statement (given the fall in claims). This is a sector, in the Motor world, in which the combined ratios [the one that measures the difference between costs (or claims) and premium income] are above 90%, and even 100% , that is, the companies are not making money. In a normalized year, we are at combined ratios of 87%.

When the frequency recovers, Línea Directa will once again be a growth company and our main interest continues to be to gain market share. The Home world doubles the sector in premium growth and the Health sector is at an investment moment. If you ask me, is the engine going to grow in double digits? It’s difficult considering the market share we already have, but I do think it will beat the market again.

Línea Directa ranks fifth in Motor insurance in Spain, according to ICEA, with a 6.59% market share. How are they going to scale positions, with clients of other insurers or via acquisitions?

We have always grown policy by policy and thus up to the 3.3 million we currently have. The goal is to continue growing organically with a retention rate of 91%. How do we acquire clients? We make a very good investment in brand awareness; We have a very rigorous selection of risks, that is, we are able to give an individualized price to each person, but we have not been left behind, we continue working, we have projects (such as offering a rental car with insurance included, etc.).

We are also testing the market. A future issue in insurance is pay per use and that is where we have to go. At Hogar we have a lot of travel. There are still 5.2 million houses uninsured. We have to reach agreements with third parties, like the one we have done with Naturgy so that they generate clients for us. And in Salud (Vivaz) there is everything to do, it is the fastest growing branch of non-life in Spain.

Every year 300,000 new private insurance clients enter our country, and it is clear that Covid has had something to do with it as well. In this sector – where 70% of the clientele is in three companies, and the rest very fragmented – we have a portfolio of 90,000 clients. We are going at the pace we wanted to go, but taking great care of the risk.

Inorganic growth has never been in the DNA of the insurer …

Our obligation is to look at all things, what happens is that we look at them from a profitability point of view and not from a balance sheet. And if there is ever an opportunity and the board appreciates it, we will do it, although the important thing is not to deviate from focus and follow the roadmap.

The combined ratio, with data at the end of June, continued to improve below 84% thanks to a new cut in costs, but not because the loss ratio continued to fall. What room for improvement in Autos is there still?

We do not have a cost drop figure, but I think there is a journey from the point of view of efficiency, which we achieve through technology.

Could the entry into new businesses penalize the profitability of the business?

ROE [which closed June at 34.9%] is not threatened by the investments we are making. It is a matter of reorganization of expenses. If at any time we make some type of investment that is going to have an impact from the ROE point of view, what you have to do is tell the market and it is he who will validate it.

We don’t look at the quote much. From the shareholder’s point of view, we are a gem, with an ROE of 25% [the implicit minimum that Línea Directa is talking about] or 35%, with a dividend yield of 5.4%. Shareholders give you a vote of confidence when you do things right.

“We are a company with a very high spirit of retribution”

Is it possible that the 35% ROE of the first semester is repeated during the second?

I hope so. One part of the ROE equation is very stable, but we are going to see how we close the third quarter.

Let’s talk about the future. The Motor part continues to represent 84% of total premiums, for only 13% of Home and Health which is residual. How do you see the company divided by business in a few years?

And how far is that profitability point for Health, taking into account that the combined ratio closed the semester at 147.4%?

For Health to be more or less breakeven, we should double the client portfolio. If we reach 180,000 clients in two or three years, we will be profitable, but in the health world, you have to be very careful with risks.

Do you maintain the idea of ​​achieving 1,000 million euros in premiums in the next few years?

It is something that is in perspective, but I like to be very cautious after two very strange years. You have to wait for things to normalize, which seems to be the case, to see what happens.

Dividend
Línea Directa was presented to the market with a very clear dividend policy, which is to distribute a minimum of 70% of the net profit among shareholders. On July 7, the insurer paid its first payment as listed for a value of 0.0244 euros gross per security. It will be the first of the four annual payments that, foreseeably, the company will make following a generous remuneration policy.

” We said that the payout floor would be 70% and we have paid 90%, which is a message. We have always said the same thing. When you have stable capital and results and you do not have other sources of investment What you must do is return it to the shareholder via dividend. We are a company in which we have a very high spirit of shareholder remuneration, “acknowledged Carlos Rodríguez, financial director of the firm during the interview, as long as the Solvency ratio remains at levels of 180% -200% -in June it closed at 203% -.

That 90% is more in line with its British counterparts, such as Direct Line and Admiral Group , which the market more closely resembles Línea Directa. Admiral Group’s annual payment exceeds an expected return of 7%, according to Bloomberg estimates, while Direct Line is going beyond 7.5% in twelve months. Since April 29, the day Línea Directa went public, the appreciation of Admiral on the stock market is 20% – less than half that of the Spanish one – while its other comparable adds another 9%.

Would they contemplate joining the buyback craze that could spread across the European financial sector? “We do not have it on the roadmap,” Rodríguez says emphatically. He considers that between the revaluation in the stock market and the return of 5.4% of the expected dividend, the attractiveness of Línea Directa is very high: in total, the joint remuneration would reach almost 50% today, taking as a reference the payment of 0.095 gross euros that is expected charged to the 2021 results.

The Bankinter shareholder
Since the IPO, one of the risks that the market has rumored has been the possible flow back (or possible divestment and, therefore, price pressure) of the shareholders, to which has now been added that of a possible opa. “One of the problems of low liquidity, around 300,000 euros a day, is because there are no people who want to sell. It is quite good” and clears the idea that relevant shareholders of Línea Directa, such as Bankinter -with 17, 42%, Jaime Botín (through Cartival, with 19.15%) or the Masaveu Foundation -which has 4.37% – could get rid of part of the capital.

“From the point of view of the takeover bid, the first thing is that the reference shareholders of the company have shown their support since its inception. We have a large institutional base, with a free float of 59%, and 41% in very institutional solid. we work with the idea that we will continue as an independent company long time , “said Carlos Rodriguez, CFO Hotline.

So, has the minority shareholder that comes from Bankinter also remained in the company? “If you look at the liquidity of the security, on average about 300,000 euros a day, it seems that the shareholder has held in value. The shareholder considers that it is a company that has two compensation components: one is the dividend and the other the revaluation that it has had in the market. The institutional is clear, but the private shareholder also remains invested. ” In total, and once the capital has stabilized, Línea Directa has 55,105 shareholders.

With a capitalization that exceeds 2,000 million euros, the insurer could be a clear candidate for the Ibex, despite the liquidity. “It is not the objective,” acknowledges Rodríguez, who believes that now “once the capitalization is achieved, work must be done on the liquidity” of the shares, which is the main obstacle to their inclusion in the index, although there has only been one review by CAT (Ibex Advisory Committee) since its listing in April.