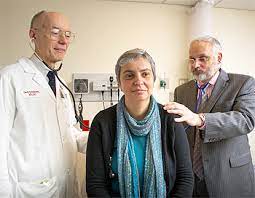 His schedule is more like a great rock band tour, but instead of the guitar, he masters the scalpel (and some fancy robots). And he is a true virtuoso in his instrument: not in vain, he is the surgeon who has operated in more countries and the creator of an innovative technique to operate the thorax from a single and small incision, something that he is now also doing using a robot.

His name is Diego González Rivas , and he is a thoracic surgeon. Born in A Coruña in 1974, he has developed an extensive career that has taken him to no more and no less than 123 countries, a world record (in addition to the world of fiction: one of his surgeries appeared in the popular series’ La paper house ‘).

“The pandemic has slowed me down”
His work pace is strenuous: “A hard day operating 21 patients today, ” Diego González Rivas explains from Barajas airport 20 minutes away . “All great.” From there a flight departs that takes you to Lima (Peru).

“I have been operating for lung cancer about 850 patients a year, ” he says. “To get an idea, a surgeon in Spain usually operates between 80 and 100 a year.” All of them interspersed with flights and trips between one destination and another: in just over a month, it has scheduled operations in Portugal, Spain, Peru, Ecuador, Romania, Ukraine, Belgium and Kuwait; Also, in between, he teaches other surgeons his particular and technical characteristics.

And that, he acknowledges, the coronavirus pandemic has slowed him down: “Nothing to do with what happened before. With the pandemic everything has been very relaxed; before I was five years in which maybe 10 or 12 went around the world. times a year . I could be in Shanghai (China), fly to New York (USA) to give a talk and come back to Shanghai. Or maybe I was in Russia, flew to São Paulo (Brazil), operated in one day and went back to Shanghai.

Jet lag, he says, is milder now . “Only when I go to America. During the pandemic I traveled to Berlin (Germany), the Netherlands, Kuwait, Africa … and there is hardly any time difference there.”

“In this sense it was good for me. I slowed down a bit … I balanced myself,” he laughs. “I was operating a lot of patients, very tired, and I realized that I was doing nothing but operating … It was a wild rhythm .”

“It is one thing to visit a country and quite another to operate in it”
The patients he treats from all over the globe have a number of characteristics in common. All the procedures are major surgery, I either operate them as part of the courses he teaches or they are especially complex cases , most of them with lung cancer. The latter are operated on in one of the 11 hospitals where he usually works or, as exemplified by a recent case in Honduras, when a colleague asks for help and catches him ‘on the way’ (by ‘on the way’ we understand a detour from Costa Rica to Honduras).

“They were very complex young patients with endobronchial tumors,” he recalls: “They had been there for a year and did not know how to operate on them . I was going to Costa Rica and through a chat with some surgeons from Latin America they told me that they had these patients that they did not know. what to do with them “.

“So I reorganized my schedule and went to Honduras two days before to operate. And that was a tremendous adventure, because they had nothing; there was no material and that surgery had never been done in the country. But with companies, with donations … At the last minute we put together all the material, “he says.

Trading in so many places is not easy. “One thing is to visit a country,” he says, “and it is quite another to operate in it. To operate, you need a lot of infrastructure , and that if there is interest, because the surgeons there many times do not want you to operate on their cases.”

That doesn’t stop you from hunting for new destinations. As he admits, he still has some parts of the map pending, namely Iceland, Syria and half of Africa ; Still, he may soon add some of those pins to his map, as he explains that he is already planning a foray to the Arctic island and a tour of Africa to teach master classes in countries like Togo or Gabon.

“What we are doing is a new revolution”
These teaching tasks are largely explained by the advanced technique of which González is a pioneer: the VATS Uniportal . It is a form of minimally invasive thoracic surgery, or video-assisted surgery (which is what VATS means) but in which, instead of accessing the patient through the two or three incisions with which it used to be performed, it is done through of a single (uniportal).

In the words of González himself, “we make a single incision of two or three centimeters, and there we put all the instruments, a video camera and operate”. The advantages of this system are lower risks, less pain and a shorter postoperative period. This technique, according to the surgeon, “in 10 years has spread throughout the world.”

But as if that weren’t enough, the next step goes further. As you count, you have now put a robot into the equation .

“The Da Vinci robot (to operate)”, explains the surgeon, “had already existed for years. But it needed five incisions. That is why I did not use it. However, a few years ago I began to develop a special robot that had only one arm “. This development has been baptized as the Da Vinci Single-Port robot, or SP robot (single portal robot)

“This robot”, he continues, “we had already been testing it for three or four years and we already had it ready to start doing lung surgeries , but in March 2020, when we had everything planned to start doing it in Shanghai, the pandemic came. “.

Luckily, González is already planning to resume those first operations for next year, although he warns that he does not see possible that his robot will arrive in Europe until 2023.

And, until then, you’ve found a way to get ahead of that moment. “Meanwhile,” he starts, “since I have the other robot, the conventional one with five arms, during the pandemic I began to investigate and realized that I could put three arms through an incision.”

Bronchial reconstruction with the Da Vinci uniportal robot.Bronchial reconstruction with the Da Vinci uniportal robot.Diego Gonzalez
“Today’s science fiction is tomorrow’s reality”
In fact, it is not difficult to realize the Galician’s concern for innovation. As he explains, for example, he was also a pioneer in performing surgery without intubation (without assisted ventilation) in 2014, with the patient sedated.

Asked about possible futures, his imagination surprises with ideas that would seem to be taken from a novel by Asimov or Phillip K. Dick: “Less invasive than a single incision … The least invasive would be to operate through a natural orifice . lung, or by the anus. “

“This has been done, experimentally, but not in the thorax. And it does not have so many advantages,” he assumes. “I think that what I would like in the future is to operate with micro-robots . Put robots in the body and that you handle them from the outside and remove the tumor and remove it without making incisions.”

” These are things that seem science fiction , ” he admits, “but if I would have said 25 years ago it would be operating a lung cancer through an incision three centimeters and a robot would have seemed impossible. I think the science fiction today is the reality of tomorrow “.