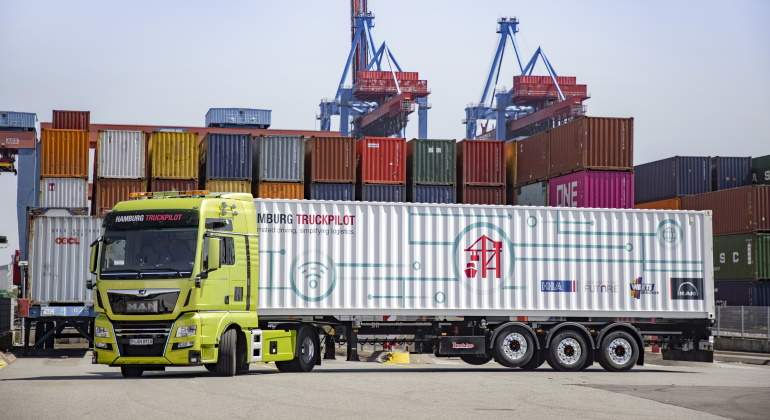 In the age of sustainability, various car manufacturers are striving to produce low-emission vehicles. But in a few years this will no longer be one of the problems. After the decarbonisation of transport, the stage of autonomous driving will arrive and there will be more actors who today have businesses that have little to do with the manufacture of vehicles.

That autonomous driving still has a few years to complete its implementation is a fact . What is no longer so utopian is observing how some developments are already being implemented by various companies. In the case of vehicles, this driving is already taking place in some states of the United States.

However, the development that remains ahead of this type of technology to be implemented is still very broad. Debates such as responsibility in the event of an accident are being carried out with the aim of implementing the technology in a short space of time. But in the case of merchandise, all this technology seems to have come from the distant future.

Autonomous trucks
The German manufacturer Man Truck & Bus , belonging to the Volkswagen Group, in collaboration with the German company Hamburger Hafen und Logistik (HHLA), have developed since 2018 a pilot project in the port of Hamburg for autonomous driving of goods . This project, called Hamburg TruckPilot, has confirmed that automation is no longer a dream for the future, as it can be integrated efficiently and safely into logistics tasks.

The tests were carried out at HHLA’s Altenwerden Container Terminal (CTA) in which up to 6,000 kilometers were traveled in order to test the truck. These tests were carried out within the port of Hamburg over a 2-kilometer journey. In addition, they were made with a 12 meter long container and lateral precision when loading and unloading.the container was around 5 centimeters.

The truck, a TGX model from Man Truck & Bus, autonomously traversed the terminal grounds to occupy the correct position in the container storage lane and maneuvered backwards by itself to the corresponding storage position. All this at a speed of 25 km / h and without the emergency driver having to intervene in the whole process.

Man’s board of directors for Research and Development, Frederik Zohm , noted that such projects “demonstrate that the use of autonomous trucks is technologically feasible and can be efficiently integrated into logistics processes . ” In addition, he acknowledged that they are testing “practical automation solutions with the aim of preparing autonomous trucks for series production from 2030.”

Likewise, Man Truck & Bus’s autonomous driving project manager , Sebastian Völl, explained that this type of technology “is part of the strategy of the Volkswagen Group and HHLA”.

For his part, HHLA project manager and head of Hamburg TruckPilot , Till Schlumberger, assured that “the safe integration of autonomous trucks in the terminal processes is a great challenge, since autonomous and classic transport intermingle.”

But in order to carry out all this technological development it is necessary that the legislation accompanies . In Germany, Parliament approved last May a law on autonomous driving that allows the use of these autonomous vehicle systems in the country in defined areas of operation, such as routes between logistics centers and always under technical supervision.

The United Kingdom, for its part, also promoted legislation on the use of autonomous driving. It is true that today they are in an embryonic phase and that developments require the supervision of a driver, but they are the first steps to legislate tomorrow.

However, the project has also served to collect a large amount of data for autonomous driving, which can be used for other projects in the future.

Arrival of the ‘telecos’
But the whole process of autonomous driving will inevitably need telecommunications companies. Thus, the German subsidiary of Telefónica, together with partners such as Continental, Deutsche Telekom, T-Systems and MobiledgeX , have used a traffic collision warning application to demonstrate the technical interaction of two separate communication networks in real time.

And, since the two operators connected their telecommunications networks based on the cloud, Continental was able to implement a collision warning service for road users and operate it with a stable and fixed latency. This network, used with the MobiledgeX cloud platformand that provides access to the network resources of the telecommunications providers, supposes the demonstration of communication in real time of resources in the cloud of two network operators.

A pilotless helicopter that can carry 200 kilos
Another trend that has the objective of consolidating in the future is that related to urban air mobility. Thus, the German company Velocopter showed its electric drone VoloDrone. It is a pilotless helicopter that is designed to transport any of the six sizes of pallets of the International Organization for Standardization (ISO), weighing up to 200 kilograms in a range of 40 kilometers.

This electric drone takes off and lands vertically (eVTOL technology) and allows the transport of both goods and passengers. The drone has a diameter of 9.15 meters and a height of 2.15 meters. Such is the interest that has aroused that last year the Geely Group created a joint venture with Volocopter, called Aerofugia, with the aim of bringing this type of urban air mobility to China in the next three to five years. In September, Aerofugia signed an agreement to buy 150 of these drones. In addition, the company will also produce these models in China.