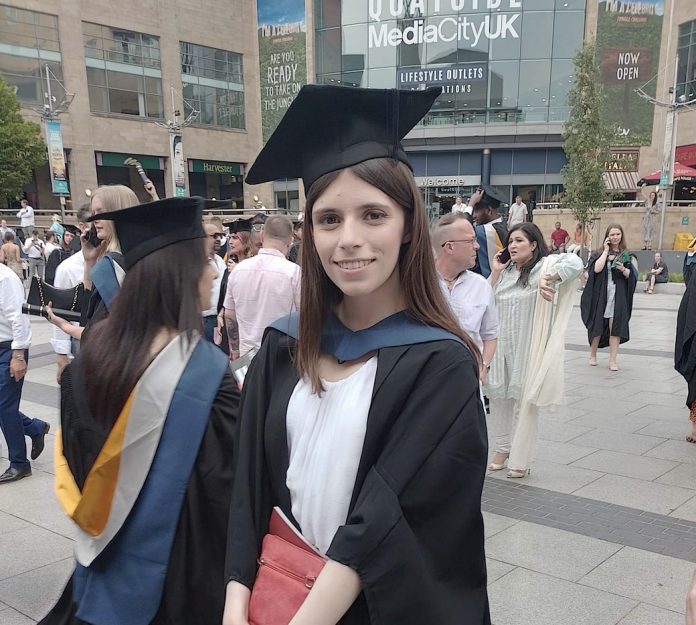 A former music student from North Warwickshire and South Leicestershire College (NWSLC) who went on to study at the University of Salford has secured support for a social enterprise that stages music gigs for people with sensory perception disorder, autism, and PTSD.

Singer Tuze Duzen, who studied at NWSLC’s Hinckley Campus, graduated from the University of Salford at the top of her class in 2022 with a first-class degree in popular music and recording. As part of her studies, Tuze worked with Oldham Youth Council and the Positive Steps charity to design a low sensory impact experience for live music lovers. The successful concept attracted the interest of disability equality charity Scope, which has pledged to support running events like these in the future.

Tuze said, “As students we were tasked with a project to give something back to the community and decided to focus on providing a positive experience of live music for people who struggle with loud noise, crowds, and bright lights.

“We designed a low sensory impact experience organised with tables as well as chairs, including places where people could engage in play or craft activities using a fidget spinner or Rubix cube, or pencils and paper. We created a discreet breakout area using low lights and a soothing space-themed projection. We kept the volume of the music low and minimised the amplification.”

The successful concept attracted the interest of disability equality charity Scope, through its Youth Community Collective programme designed for 18-25 year olds who want to create positive change for disabled people within the Greater Manchester community. It also seeks to raise awareness and address social barriers present in society.

Ben Hodge, Scope’s Youth Community Engagement Officer for Manchester said, “At Scope, we hear too often that disabled people cannot participate in and enjoy their community because it’s not accessible.  This can lead to isolation, so we are very excited to support this sensory-friendly gigs project. I look forward to more young people bringing projects to the disabled community in Manchester.”

Tuze said, “The pandemic lockdown had a significant impact on my university experience and because of the restrictions on live performance, I turned my attention to composing original music and arranging existing songs with a fresh twist. I plan to release my own concept album within the next year. During my studies I specialised in audio for media, producing pieces for radio, film, and TV. I have also been experimenting with synthesisers and technology, using vocal layering to create a range of effects with my voice.

“Ever since I was commended for my intonation in a school concert at the age of seven, I developed a love of pop, rock, and a wide range of music. I was particularly inspired by my first live gig when I saw Iron Maiden at the NEC. My college course at NWSLC gave me the freedom to explore widely within the discipline and I became aware of many career routes that I might not have known about if I had followed an academic route.

“My time in college has really opened my eyes to the options available in music and I have surprised myself with my interest and ability in the technical aspects of music.”

Tuze was presented with the Bright Star of the Year Award at the college’s celebration of achievement celebration in 2019 and won a Bronze certificate as part of the BTEC Student of the Year awards. As well as working with Scope on the social enterprise project, Tuze is looking for a role in arts administration, student support or events management.

Marion Plant, OBE FCGI, Principal and Chief Executive of NWSLC said, “It is always gratifying to hear from former students who have progressed with their studies and achieved so well. Congratulations to Tuze on her degree and also on successfully delivering a great new concept that accommodates neurodiversity. We wish Tuze well in the future as she takes the next steps in her career.”