C. de Madrid Sees It Impossible To Maintain Ratios Of Pandemic In Classrooms 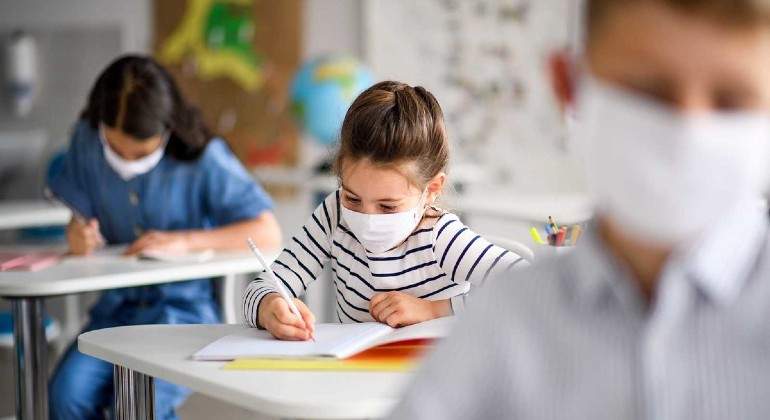 C. de Madrid sees it as “impossible” to maintain the ratios of the pandemic in the classrooms but is committed to continuing to lower them. Moreno has warned that the drop in ratios is “the vaccine against school failure”.

The Minister of Education of the Community of Madrid, Enrique Ossorio, has recognized this Thursday that it is “absolutely impossible” to maintain the ratios of the pandemic in the classrooms next year, given the investment that would have to be made in infrastructure, but he commits himself again in which they will continue to lower them.

“The ratios for the 2020/2021 academic year were the consequence of an extraordinary situation, the pandemic, which we had never experienced and we really achieved the impossible in record time. We had a triple objective: maximum quality, maximum security and maximum presence. we achieve, “he said in his speech in the Plenary of the Assembly before the criticism of the deputy of United We Can Agustín Moreno.

Moreno has warned that the drop in ratios is “the vaccine against school failure” and has stressed that for the coming year we must ensure full attendance and guarantee educational quality. In this sense, it has been asked how they will do it if around 5,000 teachers will no longer be hired and when the Community needs 12,000.

In his opinion, the current teachers are “insufficient” to unfold and lower the ratios. The deputy from United Podemos considers it “a shame” that the richest autonomy is the one that invests “the least” in Education.

For his part, Ossorio has defended that Madrid is the autonomy that made the most effort to face the pandemic in the classrooms , “400 million euros of investment, 10,600 hires and 7,500 new spaces.” At this point, it has affected that the extraordinary situation cannot become “ordinary” because if it were, “the quality of Education” would be damaged.

“Reducing the ratio per classroom by five students in all educational stages implies a human resource expenditure of 700 million euros per year, and that is not the main problem. The main problem is that all the infrastructures would have to be adapted,” he explained the Madrid councilor. As he has stated, it is “absolutely impossible” that it is possible to “operate” in all of them in order to lower the ratios.

For Ossorio, once the worst part of the pandemic has been overcome in September, they will proceed to do what the central government has ruled: return to the presence and return to the ratios of the current regulations.