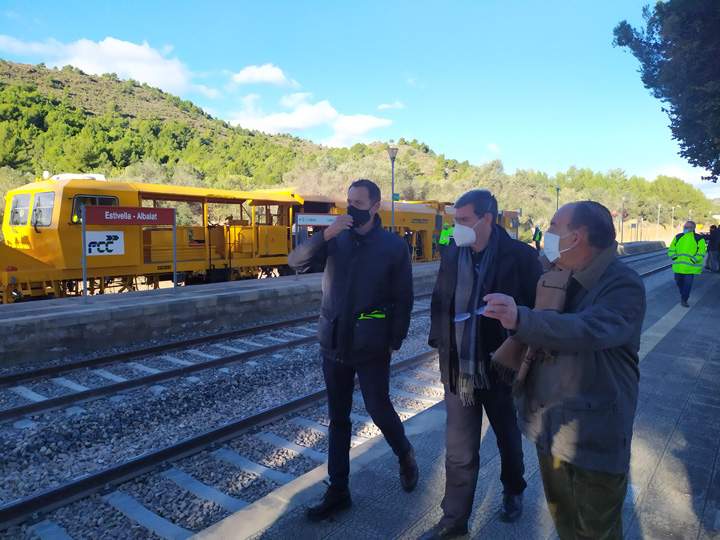 The improvement works on the Sagunto-Teruel-Zaragoza railway line, a strategic infrastructure to link the Cantabrian corridor with the Mediterranean and attract more traffic from the north of Spain to Valenciaport, are progressing at a “good pace”, especially the construction of seven new sidings that, when they are in operation at the end of 2022, will mean that there may be between 50 and 60 weekly freight trains from Zaragoza compared to the five in 2017.

This was expressed this Monday at a press conference by the president of the Valencia Port Authority (APV), Aurelio Martínez, and the general director of the Administrator of Railway Infrastructures (Adif), Àngel Contreras, after their visit to the Estivella sidings ( Valencia) and La Puebla de Valverde (Teruel) to see the current situation of the works.

The president of the APV has affirmed that the improvement of this line is “strategic” for Valenciaport and the Spanish economic activity, since “it will facilitate the attraction of merchandise traffic from the north of Spain to its exit from the east from the Port of Valencia”. For this reason, Valenciaport opted for this “fundamental” route.

“Valenciaport brings together 41 percent of both the import and export activity of the Spanish port system, it is the first port area in the movement of containers and the best connected one in Spain”. With this type of action, the aspiration of the Port of Valencia is “to have a greater presence in the northern areas that move traffic to the east,” Martínez stressed.

The line works include the construction of seven 750-meter-long sidings in stations located in the Valencian Community and Aragon: Cariñena, Ferreruela, Teruel, La Puebla de Valverde, Barracas, Navajas and Estivella. These last four have practically finished their works. In addition, to these we must add that of Cella.

According to the general director of Adif, the Master Plan for the line has a global investment of 441 million euros, of which one hundred have already been executed and more than 200 awarded, 20.6 of them financed by the PAV. “Between March and April of next year these seven sidings will be finished and we trust that, after the tests carried out, they will be operational by the end of 2022,” said Contreras, who added that if in 2017 the average number of weekly trains to The Port of Sagunto was five, in 2021 it is for 30 services, with peak weeks of 44, while, once the actions are completed, they could reach 50-60 weekly trains from Zaragoza.

The objective of the plan is “to significantly improve the state of the current infrastructure to enhance this section, especially for freight traffic, since it will allow the circulation of 750-meter trains, which will facilitate rail-port connections with logistics centers in this area. strategic railway axis, which runs through territories that represent 21% of state GDP “.

Electrification phase
“The line is advancing, we are now in the electrification phase. In the Sagunto-Teruel section we are awaiting an environmental impact statement, the processing of which has already been launched and we depend on the Ministry of Ecological Transition,” said Contreras, who added that the level of rail traffic has multiplied by more than ten in recent years “.

Once all the infrastructures have been completed, “the line will have greater capacity, travel times will be reduced, the competitiveness of freight services will improve, traffic speed will be increased, efficiency will be increased, and electric traction trains will be able to be incorporated. , better parameters of reliability and comfort will be offered, the possibility of incidents will be reduced and the infrastructure will be interoperable with the Cantabrian and Mediterranean corridors “, Contreras pointed out.

Double via
For his part, Aurelio Martínez has stated that if the traffic demand increased, it would force to consider the double track. “I have always thought that it was a strategic line because it connects very dynamic economic centers and, without a doubt, I am sure that, in a reasonable time, the double track will be necessary,” he said, and has advocated waiting to see what pass.

“I am not a technical person, but I think that in a reasonable period of time for rail traffic, 10 or 15 years, there may be a traffic saturation, which would be excellent news,” he stated.

In addition, he stressed that “it is no coincidence” that the railway highway that the Port has inaugurated is the one that connects Madrid-Valencia, since it meets the requirements of distance and high traffic volume, and was “almost, almost asking for it to be done “. “If not, it is absurd,” he said.

Meanwhile, he pointed out that the distance between Valencia-Zaragoza is adequate but “there is still not enough traffic.” “But if in Spain we are willing to replace road traffic by rail and move to European lines, we will have to start thinking about what to do,” he added.

For his part, the general director of Adif maintains that this line, in terms of gauges and disposition, once the actions are finished, it would be “capable of housing a rail highway”.

Dry port
When asked about the dry port project, Aurelio Martínez has indicated that it has been claimed “from the first day” by the Teruel society and has stressed that the Port of Valencia “is going to make a bet to co-finance” access to the Logistics Platform Teruel-Aragón (Platea) from Cella.

Thus, he recalled that the Port agreed to carry out an economic study to see the real need, together with Adif. In addition, it has affirmed that they maintain contact with the Government of Aragon, since “they also have an interest in this infrastructure.” “The idea is to design a thing according to the real needs” that there is, has concluded.