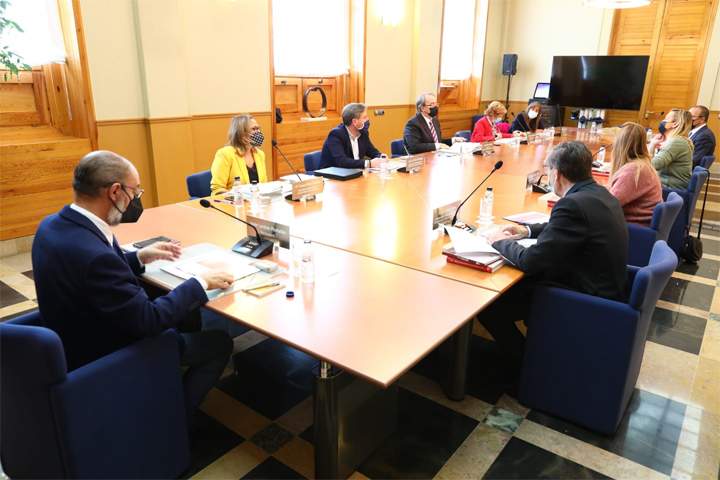 The Minister of Finance and Public Administration of the Government of Aragon, Carlos Pérez Anadón, presented this Friday the draft law on the Budgets of the Autonomous Community for 2022, which amounts to 7,444 million euros with the boost of European funds.

The Governing Council has approved the bill, which Pérez Anadón has subsequently registered in the regional courts for processing. This is the second highest budget in the historical series, Pérez Anadón said at a press conference, adding that it is aimed at creating wealth and employment.

The forecast is that the Budget is approved in a timely manner. The 2021 accounts will be closed around November 20, the counselor has advanced, who has rejected the “malicious” technique of closing it earlier.

Redirect
The head of the Treasury has indicated that the 2022 Budgets “begin to redirect the situation” having a “watchful eye” in the face of the health crisis, which “has not yet been resolved.”

Next year’s budget will contribute to “a change in the cycle that allows us to grow and redistribute,” Pérez Anadón continued, adding that “these accounts are designed to bring us as close as possible to the end of the crisis.” He highlighted that the four parties of the Government of Aragon have given the green light to the bill that both the PP and IU abstained from voting on the spending ceiling.

Health, the department with 2,242 million; Education, with 1,140.5 million; and Citizenship and Social Rights, with 447, are in charge of social protection.

But, without a doubt, the effort will focus on the ministries in charge of driving the recovery, which grow 144 million to boost the competitiveness of companies, economic growth and employment.

The 2022 accounts are also the second to be prepared under the direct effects of the coronavirus pandemic, if the reworking to which the 2020 accounts had to be subjected after the health crisis broke out is discounted, so they participate again of an extraordinary and atypical character.

The structure of the accounts for 2022, the second highest accounts in the historical series of Aragon, combines the gradual recovery of the ordinary figures of the pre-pandemic budgets, due to the withdrawal of extraordinary funds from the Government of Spain, with the expansive action associated with the Next Generation funds – React-EU and MRR -, in charge of the revitalizing task of the economy.

In this way, the 2022 accounts, made up of 6,080 million of non-financial expenses and 1,364 million of financial expenses, are emerging as a fundamental instrument to manage the exit from the crisis and bet on a more promising future, they are budgets that contemplate the needs of all sectors and therefore of all citizens.