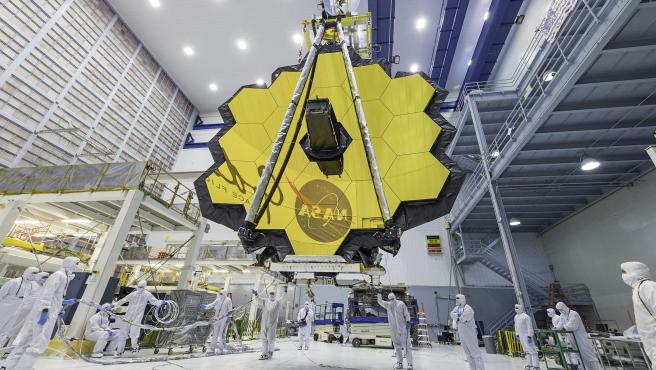 The James Webb space telescope has arrived at the port of Pariacabo in French Guiana, now the European Space Agency (ESA) and NASA are preparing the mission for launch on the ‘Ariane 5’ rocket in December .

Starting next fall we will be a little closer to knowing the deepest secrets of the Universe thanks to the James Webb International Space Telescope, the largest and most powerful observatory ever sent into space by humans.

James Webb Space Telescope: For Astronomers, Your Contribution Will Be “Data Heaven”
This next great space science observatory is designed to answer unanswered questions about the universe and go one step further to expand our knowledge of the origins of the formation of stars and planets until the birth of the first galaxies . In addition, its process began 15 years ago and each launch requires careful planning.

The telescope weighs six tons and its dimensions when folded are 10.5 meters high and 4.5 meters wide , so it was sent in a 30-meter long container through an exceptional mission to transport it to the Port. Space. For added protection against contamination , the clean rooms are equipped with additional walls of air filters and a dedicated curtain will wrap around Webb after it is mounted on the rocket.

“It is a pity that in Spain there are no more astronauts who can inspire the little ones and make them pursue that vocation”
More than 100 specialists participate in the launch , meaning employees will work separately to prepare the telescope and launch vehicle for a momentous liftoff with the rocket. In this way, they ensure that it is not damaged during the trajectory and that it remains in good working order.

Ariane 5 is a fairly suitable rocket for carrying science satellites with an impressive ability to send missions to the second Lagrange point (L2) , thus, it will free the Webb telescope on a path towards L2 where it will continue for four weeks – this trajectory is four times farther than the Moon from Earth. On the other hand, its ventilation ports will allow a smooth transfer of the telescope into a vacuum.

One of the primary mirror segments of the James Webb Space Telescope, coated in gold.
The telescope will be transported to the European space center in Kourou where preparations will begin for takeoff, which is scheduled for mid-December.