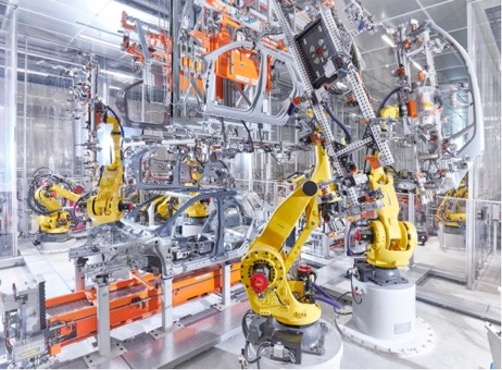 The Volkswagen Group has placed an order with FANUC for 1,300 robots, demonstrating the strength of its relationship with the leading industrial automation specialist. Throughout 2022 and 2023, FANUC will supply four VW plants across Europe with a variety of robotic solutions to support production of both Audi and VW models.

The majority of the robots will be installed at Volkswagen’s manufacturing facility in Bratislava, Slovakia. “We are delighted that we can now extend our longstanding and trusted cooperation with Volkswagen to the Bratislava plant,” says Ralf Winkelmann, Managing Director of FANUC Deutschland GmbH.

As well as the Bratislava facility, the main VW plant in Wolfsburg will also receive a significant percentage of the 1,300 newly ordered robots. Volkswagen’s all-electric ID.3 is due to roll off the Wolfsburg production line from 2023, and FANUC robots will be integral in assisting with body construction.

Further contributing to the expansion of e-mobility, the new FANUC robots will also be installed at Audi’s battery assembly plant in Ingolstadt. The fourth facility benefitting from the contract is the Audi plant in Györ, Hungary.

With a 40-year history of automating production lines, a portfolio comprising over 100 models, and a monthly production capacity of around 10,000 robots, FANUC is ideally placed to supply major automotive projects on time and on budget, despite the ongoing global supply chain crisis.

The company’s offering includes SCARA robots, which are in high demand for electric vehicle battery production due to their payload and proven reliability, as well as a newly launched model capable of handling loads of up to 1,000 kg, making FANUC the go-to automation partner for automotive manufacturers.