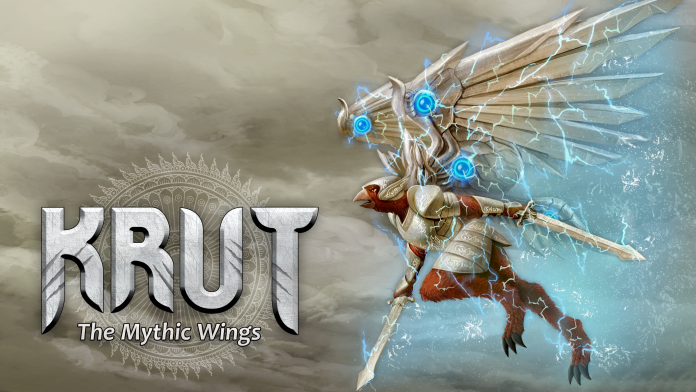 Revealed in Indie Live Expo, Krut: The Mythic Wings is a side-scrolling hack-and-slash platformer from publisher Blowfish Studios, developers GoodJob Multimedia and Pixel Perfex, and producer RSU Horizon based on Southeast Asian lore. A century-long battle will be rekindled on PlayStation 5, Xbox Series X|S, PlayStation 4, Xbox One, Nintendo Switch, as well as PC and Mac via Steam, on Tuesday, July 12, 2022

Guide a courageous Krut warrior named Vera, on a noble journey to free his people from the merciless grasp of the warlord Zulla. Battle fearsome beasts in both land and air with a barrage of quick combos and aerial assaults. Upgrade abilities to enhance offensive, defensive, and flying combat skills to defeat six powerful elemental guardians as well as restore the ancient power of the Silver Wings.

Defeat the fantastic beasts prowling each region, with an array of quick-attack combos. Use the power of flight, for the advantage in both the land and sky. Exchange spirit orb pieces to enhance Vera’s Attack, Defense, Wing Power, and other abilities. Skillfully time critical hits and precise stuns to subdue the six great guardians, collect corresponding elemental spirits, and overcome the corrupt power of the island.

“Krut: The Mythic Wings is lovingly based on the story told in the beautifully animated Thai film Krut: The Himmaphan Warriors,” said Ben Lee, co-founder of Blowfish Studios. “The team has worked passionately to showcase not only a classic hero’s tale, but also to proudly represent the historic customs of their local region. Coupled with classic speedrun-friendly platforming, Krut makes a culturally significant and nostalgic package.”

Krut: The Mythic Wings will be available for $9.99 / £5.99 / €7.99 on all major platforms, featuring language support for English, French, German, Spanish, Russian and Thai.

To learn more, visit Krut: The Mythic Wings’ official site, join the community on Twitter and Facebook, and search for #KrutTheGame on social media.