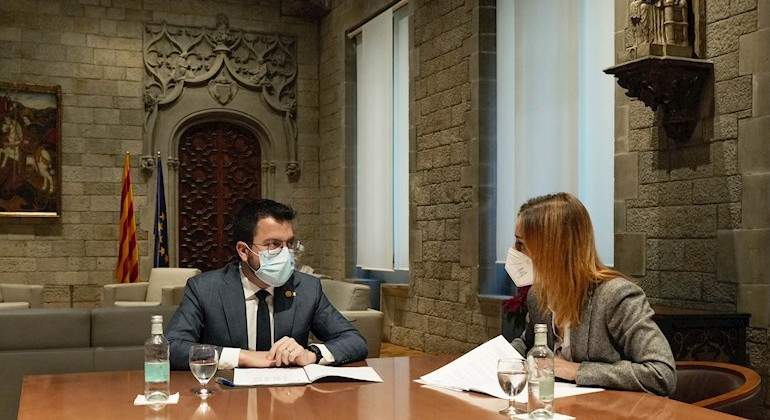 The Catalan president, Pere Aragonès, and the leader of En Comú Podem, Jéssica Albiach, yesterday sealed in the Generalitat the definitive agreement to carry out the Catalan Budgets of 2022, an alliance that includes the reform of the autonomous section of personal income tax proposed by the Minister of Economy, Jaume Giró, who creates a new, more economical section for the lowest incomes but also includes increases in the middle sections and will mean increasing the tax gap with Madrid.

The pre-agreement between ERC and the purple formation announced in November also included three new taxes and innovations in the existing one on empty houses, expanding it to individuals and not only to companies as before, and now the final political agreement schedules its development.

The one that will have a more immediate application will be that of empty houses, which from next year will be applied to both legal entities and individuals with consideration of large holders of empty houses without just cause for more than two years. For the purposes of this tax, the individual with more than 15 homes is considered a large holder.

Regarding the new taxes, once the preliminary report of the Draft Law on the tax on port emissions from large ships has already been approved by the Government, the Catalan Executive must approve, before the end of 2021, the one corresponding to the tax on activities economic that generate greenhouse gases. And “before the end of” 2022, the Government must send the Parliament the bills corresponding to the creation of these two new environmental taxes, provided for in Law 16/2017 on climate change, to begin applying them in 2023. The Income obtained from its collection will be used to endow the Fund for the Protection of the Atmospheric Environment.

Likewise, in 2022 the Generalitat must approve the preliminary report of the Draft Bill of the new tax on ultra-processed foods, which will incorporate the conclusions of the analysis of international experiences and “its success both from a fiscal point of view and its effectiveness on health” , and foreseeing that the income obtained from its collection will be used to create a fund to support sustainable operations in the primary sector.

In other areas, the budget agreement includes the increase in investments in railway, housing, health, educational and social matters that were outlined in the pre-agreement, and affects the promotion of the remunicipalisation of water supply management through advice technician from the Catalan Water Agency to town halls.

With the pact between ERC and En Comú Podem, the Generalitat’s Budgets will go ahead in the final vote that the Parliament will address on Thursday, December 23, to enter into force on January 1.