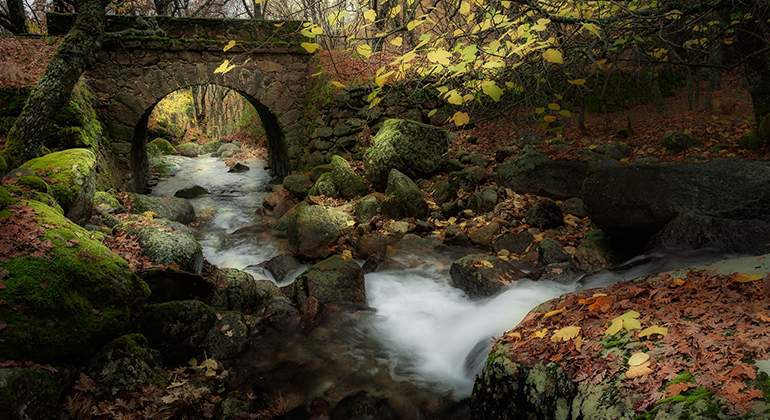 The Magical Autumn in the Ambroz Valley offers, one more year, the possibility of living a unique experience in nature and discovering small treasures in the form of landscapes, colors, smells and flavors.

It is time for chestnuts, mushrooms, the smell of fire and wet leaves. And there is no better place to immerse yourself in nature at this time of year like the Ambroz Valley, north of Cáceres, and its Magical Autumn, a Festival of Tourist Interest since 2017, the only one of its kind focused on nature and, like every year, loaded with hiking, music and gastronomy.

Eight towns from the Extremadura region participate in this festival.
It is a choral festival in which the eight thousand inhabitants of the towns that make up the region get involved: Abadía, Aldeanueva del Camino, Baños de Montemayor, Casas del Monte, Gargantilla, Hervás, La Garganta and Segura del Toro.

The setting is a valley protected by lush chestnut and oak forests, many centuries old and with their own name, which are dressed in their best colors before shedding the leaves and preparing to spend the winter, crossed by the Ambroz river and the well-known Roman road as Vía de la Plata, at the foot of the Sierra de Gredos.

You don’t have to shine the sun to admire the beauty of the landscape.
Water is always present, and splashes the landscape on its way in the form of ponds ?? where you can bathe in good weather ??, waterfalls and gorges that feed spectacular natural pools. It is its 24th edition and the programming has been overturned to make up for lost time, relive the magic of the forests and regain the energy that nature gives us.

Autumn is the time when mycology buffs populate the fields.
Among the activities, which last until the end of November, some classics such as the Bosques del Ambroz Hiking March or the Landscape and Paisanaje routes, as well as dozens of routes to do on foot, by bicycle or on horseback.

But this year there are also some novelties, such as the Autumn Passport game and many surprises in the form of special content along some of the active routes that can be enjoyed with the help of an application on your mobile. The Passport can be obtained through the page visitaambroz.es or at the tourist offices and tourist establishments of Vale del Ambroz.

Nature Festival
The Valle del Ambroz celebrates the arrival of autumn with a wide program of cultural and recreational activities (theater, concerts, comedy shows, magic and circus, the Festival of Trashumance, mycological days, craft markets ??). But to enjoy the Nature Festival, like this, with capital letters, two essential visits: the Alcornoque de la Fresneda, one of the largest specimens in the world, declared a Singular Tree, an “arboreal dinosaur” over 20 meters high, a trunk of almost seven meters in perimeter and more than 27 meters in crown perimeter.

And the chestnut trees of Temblar, located in the area of ​​Arroyo del Temblar, in Segura de Toro, near the Garganta Grande. It is a set of five monumental trees protected by the Junta de Extremadura under the figure of unique trees, between 500 and 800 years old, that make up a place of exceptional beauty. There is a six-kilometer round-trip hiking route with little difficulty from Segura de Toro.