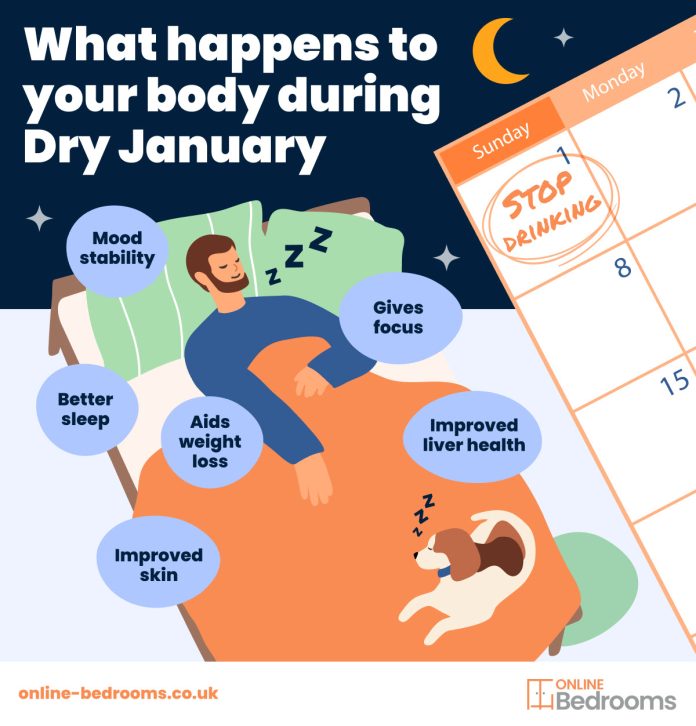 Britons taking part in Dry January are told they could experience a better night’s sleep after ditching the booze this month.

Experts at Online-Bedrooms.co.uk have researched the changes which can happen to the body by swapping alcohol for a sobering refreshment.

One of the most common New Year’s resolutions for many is to cut down on drinking and take part in Dry January, which involves not touching a drop of alcohol for the whole month.

The trend is known to have many positive benefits both physically and mentally.

Alcohol is a depressant which can seriously hamper someone’s mood once the buzz fades and with many struggling with January blues, drinking it can only worsen the negative symptoms.

Taking a break from the drink can lead to a restful night’s sleep and help shed the extra pounds gained over Christmas.

Nic Shacklock from Online-Bedrooms.co.uk said: “We all know how important it is to get a decent night’s sleep and not having a drop of alcohol for a month can lead to a blissful slumber.

“Dry January is the perfect time for those wanting to make healthy changes to their lifestyle and can result in many positive changes within the body.

“Not only can it help with sleep, but it can also lead to better mood stability and improved skin health which is noticeable for some after giving up drinking for the month.”

Here are some of the changes that can happen to your body during Dry January found by Online-Bedrooms.co.uk:

One of the changes will be less red blush on your face, especially around the cheeks. It can also give you a glow and a healthier look, as drinking alcohol can lead to dry and wrinkled skin.

Being sober isn’t a miracle cure for weight loss, but quitting booze can help to shed the extra pounds gained over the winter break. For example, one bottle of wine can have over 600 calories, so cutting this out of the diet can make a significant change.

The liver can significantly worsen after taking too much alcohol intake, so even a month’s break to improve its health can help to prevent problems later down the line.

As alcohol is a depressant, an increased intake can cause anger and anxiety. While dropping alcohol isn’t a cure for depression, a reduced intake may ease some of the negative emotions from forming.

Cutting down on drinking can increase concentration levels and give you better focus. This can also help you to find new interests which don’t purely relate to alcohol, but other hobbies and activities to occupy your spare time.