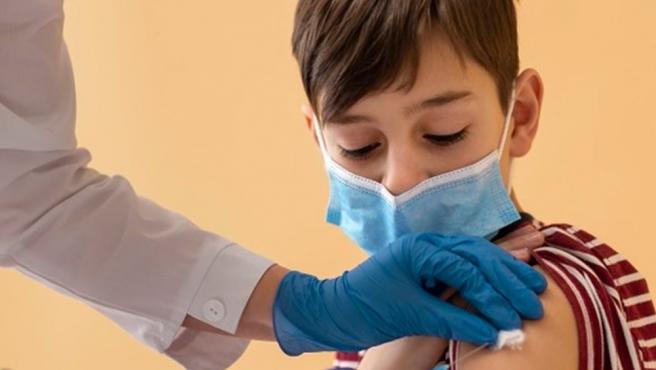 This Wednesday starts the pediatric vaccination against covid-19 in Spain. The vaccination of the 3.3 million minors between 5 and 11 years old residing in Spain will be carried out in order of risk level and age, and the Communities have chosen the health centers, schools, vaccination centers and hospitals to take carried out the immunization campaign against the coronavirus SARS-CoV-2 of the smallest.

The Public Health Commission, at the request of the Vaccine Committee, has decided that the interval of administration of the second dose is eight weeks and not three , as has been done with the adult population that has received the Pfizer vaccine – which is what they are going to administer to boys and girls between the ages of 5 and 11- and how it has been studied in clinical trials.

The reasons for this increase in the time between the two doses, as explained by the Ministry of Health, are “to contribute to increasing the immune response , as well as to have all minors between 5 and 11 years vaccinated in a short space of time with al minus one dose . “

Asked about this question, the pediatrician and coordinator of clinical trials at the Hospital 12 de Octubre in Madrid – a center that has contributed a greater number of volunteers to the clinical trial of Pfizer’s pediatric vaccine, with a total of 60 patients from six months to the 12 years-, Manuel Gijón, explains to 20 minutes that the complete regimen with eight weeks of separation between both doses is “just as effective and safe”.

“Although the clinical trial was effectively conducted 21 days apart because it was recommended in the vaccine specification for adults and that is what was tested in clinical trials, it is true that with RNA vaccines – both Pfizer and Modern – clinical trials have been done and it has been proven in vaccination regimens of adults around the world that the efficacy of the booster dose is maintained even after two to three months after the first dose, that is, that the The efficacy of the two doses is the same with a separation of between three and 12 weeks, “explains Gijón, who concludes that the guideline determined for the youngest in Spain” is just as valid. “

A downside
The researcher Manuel Gijón explains that he does not know the reasons why Public Health has established to space the two doses of the vaccine for children at eight weeks, but points to reasons of availability of doses . “To prioritize giving the first dose to all possible children. It’s my guess and that’s fine with me. If there were enough doses for the first and second puncture of all boys and girls from 5 to 11 years old three weeks apart, I’m sure that it would have been considered that way. But due to the availability of doses, added the management capacity and the dates that are ahead [ Christmas ], it has probably been decided to manage this way “.

“The maximum immunity that the vaccine provides will come later because the full schedule is delayed 3-8 weeks.”
But, in a context of rising incidence, there is a downside. “The difference at a practical level is that, obviously, the maximum immunity provided by the vaccine will arrive later because the complete schedule is delayed from three to eight weeks,” adds Gijón. But he insists that this does not mean it is not safe. “It is just as valid and safe,” he emphasizes.

The effectiveness of the vaccine is studied once it is administered to the general population, so for the moment there are only studies in the adult population. For those under 12 years of age, there will be a wait. The 12 de Octubre Hospital is precisely now examining the levels of antibodies present in the minors who participated in the clinical trials carried out this summer, six months ago, and when the delta variant was already circulating and was beginning to be predominant. Your observations will point the way forward on the possible need for a third dose also in the pediatric population.

Studies that support it
The CSIC immunologist Matilde Cañelles, also asked by this newspaper, affirms that if it has been decided to space the second dose of the pediatric covid-19 vaccine to eight weeks, it is “because it has been shown that with more spacing the effect is greater . It has been done in adults, but it is thought that it will be the same for children, “he says.

There are scientific studies that ” show better protection with longer spacing ,” he adds. One of them, for example, was presented this summer and was produced by a scientific team at the University of Oxford, who showed that a 56-day interval between two doses of Pfizer was the “optimal” interval to increase protection against the variant. delta coronavirus. This study was carried out with 503 British healthcare workers and concluded that a 10-week interval between the two punctures produced higher levels of antibodies.

Another study that finds a better immune response when the interval between doses is extended is the one carried out in Canada and published in October, which concludes that the effectiveness of the vaccine (in adults, in children under 12 it has not yet been possible to study it) it is ” significantly higher against infection and hospitalization with intervals between doses of seven to eight weeks compared to the manufacturer-specified interval of three to four weeks.”

In the United States, where they have already vaccinated about five million children between the ages of 5 and 12, the time between the two doses has been set at 21 days (three weeks). Israel, another of the first countries where children began to be inoculated and there are already about 50,000 vaccinated, is studying the best interval between doses. In Europe and Canada, on the other hand, an interval of eight weeks has been established.

Another possible reason for this is that, according to a recent Canadian study , the rate of myocarditis among young people aged 18 to 24 years – the age group in which the highest rate of this very rare adverse effect of vaccines has been observed. RNA (Pfizer or Moderna) – is shorter when the interval between the first and second doses is greater than eight weeks compared to those who received the second prick less than 30 days after the first.

This Tuesday, the Spanish Association of Primary Care Pediatrics (AEPap) has appealed to parents about the convenience of vaccinating their children because “children are not exempt from suffering severe forms of covid although the number of complications be small in relation to adults. “