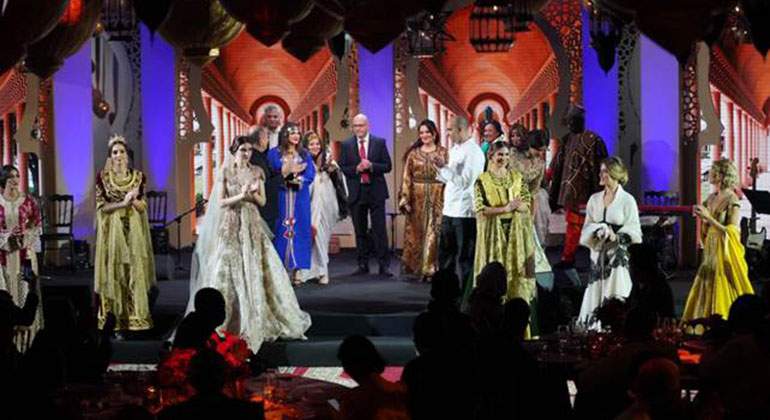 The 24th edition of the General Assembly of the World Tourism Organization, which was initially to be held in Marrakech, was held between November 30 and December 3 in Madrid. The closing consisted of a dinner / evening offered by Morocco. It was a way for the country to pay tribute to all the participants in this great mass of tourism and to remind everyone that the destination of Morocco remains in the starting block of the great tourist destinations in the world.

With this dinner, Morocco has wanted to value all its assets through its gastronomy, but also through its music, its dances and its art of dressing. Morocco is a crossroads of civilizations, a source of inspiration, a concentrate of emotions, a palette of sensations, whether cultural or religious. The country is a rich symbol of all living cultures because few nations have been able to build a model that so fully assumes each component of their identity.

It is all this wealth that the Moroccan Ministry of Tourism and the Moroccan National Tourism Office have tried to share with all the guests through an experience that combines an immersive and emotionally rich scenography. This experience was even more impressive as it took place in a unique place: La Quinta de Jarama. An exceptional site for an exceptional event. All the guests applauded the Moroccan culinary and artistic fervor. Morocco thus reminds the world of its tourism fiber and its desire to remain on the radar of world tourism influencers.

Morocco is a country with a tourist vocation. Tourism is an important component of the kingdom’s economy, which generates 7% of GDP and is one of the main world trades in Morocco. It also covers 20% of the country’s exports and has registered continuous growth for more than 20 years. With 13 million international tourists in 2019, Morocco is one of the 30 best destinations in the world, and even ranks first on a continental scale.

These days, Morocco has decided to close its borders before the arrival of the new variant. The country is demonstrating its willingness to contain the pandemic and to place the health issue at the top of its priorities. Thus, Morocco is an example in terms of managing the pandemic. It must be remembered that the vaccination rate in the country is currently almost 62%.

The country’s representatives maintain the hope of a gradual and lasting recovery as soon as the sanitary conditions are met. The various studies carried out by the Moroccan National Tourism Office show that this country will be at the forefront of the most coveted destinations, for all its tourist assets, but also for its management of the pandemic. The health factor is now a primary component in the decision to travel.

Special attention in anticipation of the recovery has been placed on the Spanish market, an important niche for Morocco. Spain is, in fact, the second source market for tourists to Morocco after France, with more than 2.2 million Spanish tourists in 2019 (+ 6% vs 2018). The Spanish market thus represents 17% of the market share of total foreign tourist arrivals to Morocco, in all markets.

The Moroccan National Tourism Office has just appointed a new delegate in Madrid as of January 1, 2022. By designating one of its main resources in Madrid, Morocco demonstrates its willingness to pay special attention to the Spanish market. The strategy put in place will aim to promote and revitalize the tourist activity in the market, since the country still has margins for progression in the different regions of Spain and intends to develop them. Morocco intends to maintain its position as the first destination for Spaniards outside of Europe.