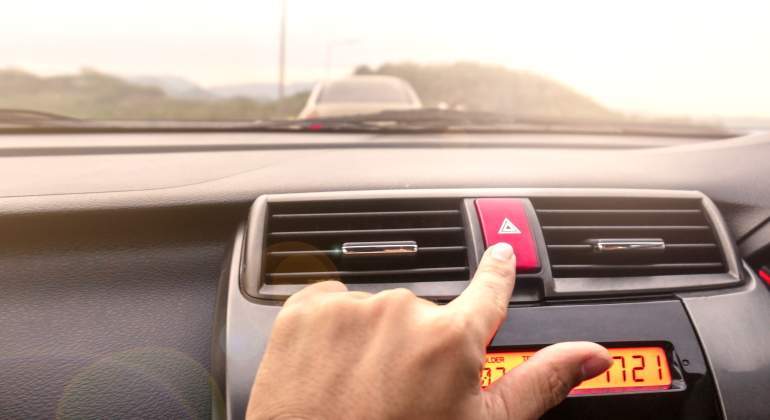 Hazard lights, as their name suggests, are those that are used in extreme cases and to warn of certain maneuvers that can harm other vehicles. A system that corresponds to each driver to turn on according to what time and for what failure to do so when it is due, can lead to a fine of 200 euros for a “serious” offense.

I return home after a long journey and, suddenly, a traffic jam on the highway surprises all drivers who have to slow down . It is the moment when, instinctively and by popular conscience, the hazard lights are turned on to warn the vehicles behind of the danger.

This case is possibly when the emergency lights are used the most, however it is not one of those that the General Traffic Regulations contemplate as mandatory . For this reason, the General Directorate of Traffic (DGT) has warned that it does not carry a fine for improper use, since it can help other drivers, nor is it punishable not to turn on the lights to warn of the risk.

In the absence of lights and in an emergency situation, the maneuver can be indicated by repeatedly moving the arm up and down
The last aspect that must be done before ” the intention of immobilizing the vehicle or slowing down considerably “. That is, if with a forced stop or with a very abrupt reduction, it will be in this case when the four indicators of the vehicle have to be turned on. In addition, if it is not possible to turn on the emergency lights, the maneuver will be indicated “by alternately moving the arm up and down with short and quick movements”.

Very fact happens with ” any maneuver involving lateral displacement or back of your vehicle .” In this case with the indicators on each side or with the reversing light, failure to signal the action would be committing a “serious” offense punishable by up to 200 euros.

Penalty for misuse
For its part, the improper use of the emergency lights, due to the danger it entails for other vehicles, is also sanctioned. In this case with 80 euros , it can be the action of activating the four indicators even when the gear is normal and there is no intention to immobilize the car.