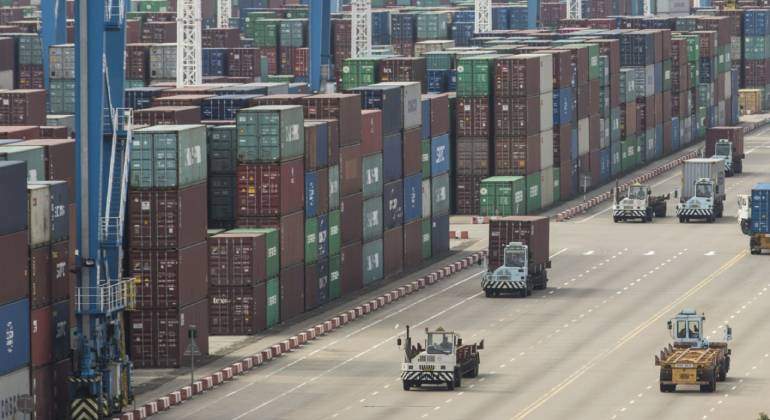 A Covid outbreak in China has led to the partial closure of the world’s third-busiest port for container transit. The Port of Los Angeles, which saw its volumes drop due to a Covid outbreak in June at the Chinese port of Yantian in China, is bracing for another possible decline due to the latest closure at the Ningbo-Zhoushan port.

Freight prices will scale back to record highs, adding pressure to a highly affected sector and the global economy. Some experts fear that the effect of the restrictions could affect even the Black Friday and Christmas campaign.

Anton Posner, CEO of Mercury Resources, a company dedicated to shipping, warns that many companies that rent boats are already adding Covid contractual clauses as insurance so they do not have to pay for stranded boats.

For the shipping sector, it seemed that the situation was beginning to calm down after the pandemic, but the new outbreaks continue to deal secondary blows to world trade.

The partial closure of the Ningbo-Zhoushan port is raising fears in shipping hubs around the world that they will face similar restrictions and slow trade flows, from perishable food to electronics.

A new blow for supply chains
The outbreaks come at a difficult time when trade routes have not yet adapted to an unprecedented surge in demand due to the reopening of economies and a rapid increase in prices. Ningbo’s partial shutdown “will likely be another blow to supply chain disruptions,” Jeffrey Halley, senior Asia-Pacific market analyst at Oanda Asia, told Bloomberg.

The Ningbo-Zhoushan port manager said in a statement late Thursday that only one terminal is closed. The port is actively negotiating with shipping companies, directing them to other terminals. To minimize the impact, the operating time of other terminals is also being extended to avoid accumulating delays.

But some ships that docked at the affected terminal, Meishan, before the closure are suspending cargo operations until the facility opens. Ningbo City is still considered a low-risk area for the virus, according to the city’s health commission, although flights to and from Beijing have been canceled.

Origin of the outbreak
The restrictions have been taken after the positive of a dock worker. Ningbo authorities said he was fully vaccinated and received the second dose on March 17. The employee was showing no symptoms and is infected with the delta variant of the coronavirus. The epidemiological investigation shows that the worker had been in close contact with sailors from foreign cargo ships.

The Baltic Index, which serves as a global benchmark for tracking maritime trade prices, has risen more than 10% since a month ago, when the delta variant began to spread rapidly.

While there have been no significant effects on US ports, the problems in China could affect companies that depend on exports from the Asian giant. Container prices have also skyrocketed. The benchmark cost of shipping a container from Shanghai to Los Angeles increased more than 220% from last year to $ 10,322 this week.

The closed terminal accounts for about 25% of container cargo through the port, calculates security consultancy GardaWorld, which said “the suspension could seriously affect the handling and shipping of cargo.”

The recent episode of the Yantian port in Shenzhen from the end of May . He left important lessons. Thousands of products were returned to the factory or its suppliers, the stock grew and the price of freight reached a record price. The real fear in the industry is that this new disruption will put additional pressure on shipments and supply of goods, slowing growth and pushing prices up.

At Yantian the shutdown lasted a month. If the complications in Ningbo are delayed, it could affect the Christmas campaign. Maritime trade generally increases towards the end of the year as companies ship products in preparation for the holidays.

“There can be far-reaching consequences after we enter Black Friday and the holiday shopping seasons” and the next 24 hours will be key to knowing if the outbreak is serious, “says Josh Brazil, vice president of marketing for Project44, a consultancy from Trade Products leaving Ningbo docks are electronics, textiles and manufactured goods, according to the city’s Customs Office, with major imports including crude oil, electronics, chemicals and agricultural products.

Speaking about the outbreak, Hugo De Stoop, chief executive of oil transportation company Euronav NV, said that “there will be an impact on China’s oil demand, but the duration of the impact is unclear.”

“The Chinese authorities are very, very strict with outbreaks that appear in ports. When they find a case, they close very quickly and isolate all workers who have had contact with the infected,” says Hugo De Stoop, CEO of the Euronav oil company. The manager acknowledges that despite acting quickly, the severity of the outbreaks causes unavoidable disturbances in the markets.