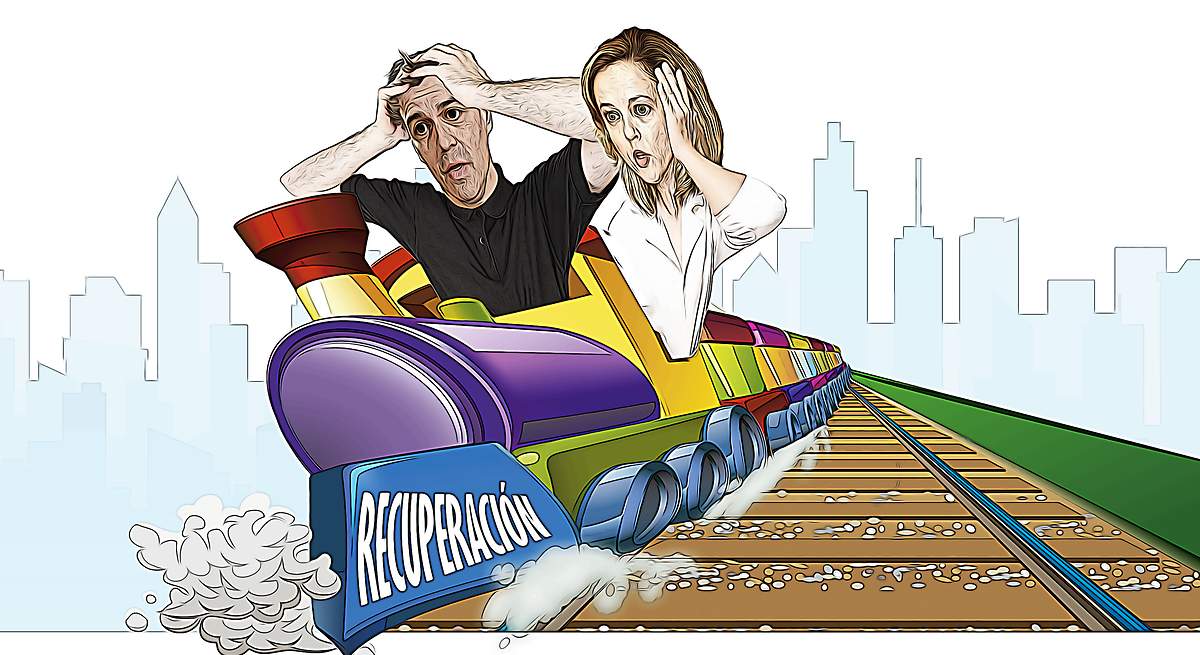 The third vice president, Teresa Ribera, more concerned about the survival of the Iberian wolf and speeding up the energy transition than for the pocket of the citizen, tried to solve the rise in electricity by putting her hand in the income statement of the electricity companies instead of reforming the fare. This Friday he had to rectify . The Minister of Social Security and Immigration, José Luis Escrivá was also wrong to accept the indication of pensions at consumer pricesto gain the support of the unions and his own government, thinking that inflation would remain close to zero for an almost infinite time. The Minister of Finance, María Jesús Montero, joined the bandwagon of errors by assuming increases in the salaries of officials above the CPI and maintaining them.

They remind me of that song by Joan Manuel Serrat: “The dove was wrong / he was wrong to go north, he went south / he believed that wheat was water, he was wrong.” The Government of Sánchez has a problem and fat due to the irruption of an unexpected event in the economic outlook, inflation , a kind of black swan that he had not foreseen and that threatens to destroy his plans after it reached the 4th of August in August. hundred , a level never seen since the beginning of the century.

Inflation is a serious problem, because it throws the public accounts out of balance at a time when it is necessary to start putting them back on track after the pandemic and because it impoverishes millions of citizens, who will see them lose even more purchasing power. The unions will redouble their pressure to try to counter it with salary increases of more than three percent , after forcing a rise in the Interprofessional Minimum Wage (SMI) of around 30 percent in the last legislature, which will create strong social tensions.

The situation will become untenable for many companies and will translate into an increase in their mortality (around 44,000 have disappeared so far this year), because they will have to add the rise in raw materials to wages or energy. The next step is a slowdown in the recovery that will lead to moderate stagflation, that is, low economic growth with high rates of unemployment and consumer prices.

The first signs of weakness were known last week, when the National Statistics Institute (INE), a rigorous benchmark in the elaboration of macroeconomic data, surprised the first vice president and head of Economy, Nadia Calviño, by lowering the 2 , 8 to 1.1 percent growth in the second quarter. The INE data sounded the alarm and will cause, according to experts, a cascade of downward revisions to the estimates of international organizations for the Spanish economy.

Consumption and business investment, after the summer awakening, have put the brakes on an uncertain horizon caused by the increase in cost of life.

In Spain, the outlook will be more complicated because the Government increased structural spending through pensions and public salaries during the pandemic and will now have to pay an additional bill of more than 11,000 million annually at the current rate of prices.

Calviño and Sánchez are wrong because this crisis is not going to get out with the push that in the previous ones. The mechanisms for protecting employment through Ertes or the termination of activities of the self-employed have cushioned the social impact, but in return they cause a drop in productivity per employee, which in the medium term will translate into a cut in workforce and employment. job.

The economy will still hold out at a good pace over the coming year, but it is difficult for it to recover its pre-pandemic levels before 2023 and from then on everything will depend on monetary policy. This week ECB President Christine Lagarde was cautious on inflation to keep financial markets calm.

Europe is extremely vigilant of reforms to obtain Next Generation funds

In the coming months, you will have to develop a true balance to gradually withdraw monetary stimulus without causing a financial shock. Although history may have much skill, it teaches that these processes always end with a deterioration in growth.

Everything will depend on the persistence of inflationary tensions. Until now, economists described them as temporary or temporary because they were attributed to a strangulation of the supply of products and services in the face of the stampede in demand caused by vaccines and the end of the pandemic. But more and more structural or permanent factors are beginning to be valued.

The rising cost of raw materials such as metals is due to the era of protectionism inaugurated by Donald Trump and continued by his successor in the White House, Joe Biden. The multilateralism preached for decades by the different American administrations is being replaced by regionalism. One proof is the alliance between the United States, the United Kingdom and Australia in defense matters, which left the Macron Government without an important contract for the construction of submarines for about 30,000 million.

Behind the records for gas or oil is a drastic reduction in investments in hydrocarbons , which has no prospect of recovering if the demanding decarbonisation deadlines agreed at the Paris Summit are to be met. The stoppage of some Chinese factories due to fuel shortages this week caused a break in the distribution chain of some products such as microchips, essential for the construction of cars.

The main dynamizing element of the Spanish economy is the Next Generation funds , which the Government clings to like a burning nail to augur a better future. But the Bank of Spain has already reduced its contribution to GDP from the 2.5 percent predicted by Calviño to less than one point, in its latest revision. The funds are intended to solve structural problems such as digitization or the ecological transition and their effect is in the medium or long term.

And here too there will be problems, because the arrival of the new German government will provoke a closer monitoring of the conditions for its disbursement. And more if the portfolio of the Ministry of Finance for the liberal Christian Lindner, in favor of returning to the strict debt and deficit conditions of the Stability Pact, is confirmed.

The Government has very difficult to comply with two of the requirements of the Next Generation: the labor and pension reform, in view of the differences with Podemos and the political row between Escrivá and the second vice president, Yolanda Díaz. Completing the pension reform will require agreeing a corrective mechanism with Podemos and the unions, replacing the sustainability factor introduced by Fátima Báñez, something that seems impossible today.

In the labor reform, the positions are very distant between Diaz, who wants to repeal it, and the flexibility that Brussels requires to create employment among young people. The scuffles as a result of the budgets show that the Sánchez government coalition has feet of clay. His only way out is to give in at the last minute, as he did with the blast to the electrics. But it is about patches, which do not solve the problems, as it was seen with the electricity bill.

Where is the economic recovery that Sánchez drew at the turn of the summer? It disappeared with the summer. “The dove was wrong, he was wrong, / he believed that the sea was the sky, that the night was morning / that the stars were dew, that the heat was snow, he was wrong”, as Serrat said.