‘Academons’, The Educational Application To Reinforce What Has Been Learned In Class 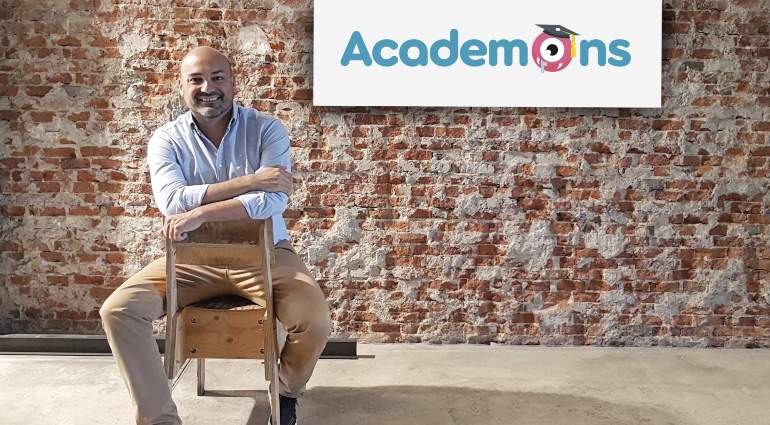 Created by teachers, this application has become a tool for children’s learning. In addition, it has been shown that playing 15 minutes a day improves academic performance up to 30%, according to the data shown in the study carried out by the Antonio Nebrija University.

Academons was the most downloaded educational application in Spain during the pandemic. Only in the first week after the cancellation of the classes there were 100,000 downloads, experiencing a growth of 2,500% . Now, more than half a million children from 100 different countries are already learning with this application born in 2019, which is being of great help for both students and their parents.

Raúl Orejas, creator of this application, has a degree in Advertising and Public Relations and has more than 15 years of experience as a Creative Director. In addition, since 2015 he has taught Creativity and Digital Entrepreneurship subjects in different business schools.

Tell us about the Academons App , how did the idea come about?

One day my niece didn’t want to give me back the tablet because I was hunting Pokemons , I was completely hypnotized by the application and I thought , wouldn’t it be great if our children were just as motivated to do a language exercise or a math problem as when they play games? tablet ? . And that’s when it occurred to us to create an App to turn all that they have to learn in Primary into a game that motivated them as much as those video games they are hooked on.

With Academons we wanted to create a solution that would make life easier for parents; with a wide variety of activities to review what they learn in class, without having to correct the exercises, receiving the results of each session immediately and with a more interactive and motivating format for the little ones. A game that would serve as a reinforcement for any subject but that had quality content, created by those who really know how to teach: the teachers .

From an idea to starting a project there is a very big step. How was each step?

Throughout the development of the application we use a LEAN methodology to minimize risks, optimize resources and correct our pre-established hypotheses on the fly.

Before starting the development of the App, we did more than 50 interviews with parents to understand their learning needs at home, what use of technology they made or whether or not they helped their children with homework at home.

Once the hypotheses had been validated, a first version was launched for tablets with contents for 4th, 5th and 6th grade of Primary. From there, we continued interviewing the different members of the educational community: parents, teachers and children, and based on their demands, the mobile version was launched and the 1st, 2nd and 3rd Primary courses were added, in addition to the subjects for bilingual education such as Natural Science and Social Science.

“The App has more than 30,000 educational games created by teachers”

Is it an interactive app created by teachers? How many professionals participated?

The App has more than 30,000 educational games created by Primary school teachers, who, based on the official curriculum for each subject and each course, have shelled the agenda and have turned it into interactive activities. 12 Primary teachers have participated in its creation.

What age group can use the app? Why did you focus on that group?

From 6 to 12 years old, that is, from 1st to 6th grade of Primary. We focused on this group because we saw that there was no specific App in Spain that covered all the courses and subjects of this school stage. There are specific apps to learn mathematics or English, but not a transversal app, with which to review any subject and that contains the entire syllabus of each course.

“In addition to increasing his performance by 30%, he also improves his social skills”

According to a study by the Antonio Nebrija University, students who use this application increase their performance by 30% ??

According to the empirical evidence collected by Nebrija University through tests and personal interviews before and after 60 students of 5th Primary, presented at the CSE International Congress “Transforming Society and Culture through Education” to analyze the impact of Academons on the performance of the students, concludes that 96% of the students obtained better academic results after using the App , managing to improve their class grades by up to 30%.

The same research also highlighted that the children who used this app increased their ability to concentrate, were more correct and made fewer mistakes and improved their “soft skills”, such as their agility in decision-making, memory, spatial perception, logical reasoning or mental flexibility.

What does this application imply in your learning?

Academons has completely revolutionized the way our children learn at home, providing a different way of relating to the curricular content.

Using the game as a common thread , the App collects the motivational mechanics that work best in video games (known as gamification) so that the little ones can learn while having fun. This way they enjoy the learning experience more. According to various scientific research, it has been shown that the use of game mechanics in the learning process activates areas of the brain that with other traditional methods such as studying or listening to a master lesson remain inactive. This reinforcement of brain activity allows to internalize the contents in a faster way and a more effective learning.

“Using the game as a common thread, the App collects the motivational mechanics that work best in video games”

What subjects can be reviewed?

Parents will find the complete syllabus for each Primary course in Mathematics, Language, Natural Sciences, Social Sciences or English. In addition, for those parents whose children are studying in bilingual schools, the App also includes the entire syllabus of subjects such as Natural Science and Social Science . In other words, it is as if we put the entire textbook for each subject and turned it into interactive games.

What is the common thread of the application?

Academons is designed as if it were a video game. Upon entering the App , the child will meet a group of small monster babies ( Academons ) that they must train to make them evolve. Each Academons represents a different subject and your goal will be to make them grow as you overcome a series of educational missions and challenges. Each mission is made up of itineraries related to the topics they are learning at school. For each completed mission, the student gets a Masterball that will make their pet evolve and get bigger.

In addition, the App uses other typical video game mechanics to keep children interested and motivate them to continue learning. On the one hand, there are the “battles”, a social component that allows children to challenge themselves with other friends and classmates, so that they can put themselves to the test and demonstrate what each one knows about that subject. On the other, the possibility of personalizing each pet with objects that they can buy in a virtual store where they can exchange their Neuros , virtual coins that are only obtained as they advance in their knowledge.

“Parents will find the complete syllabus for each Primary year. It also includes some bilingual subjects”

What learning methods are used?

Mainly the method used by the application is to learn by playing. Through gamification dynamics, the aim is to offer curricular content in a different way, which allows children to be more motivated and better internalize the content. In addition, all the exercises are self-correcting and offer feedback to the student, so that he knows where he is wrong so that he can learn from the mistake, with levels of difficulty adapted to each child to avoid their frustration

Is it also a support tool that parents can use to review with their children or give them regular exams?

The application can be used in many ways: in the classroom, teachers can use it to check if their students have understood the subject. At home, parents can download it for their children to reinforce the contents with which their children have difficulties, regardless of the subject. Or to prepare for that exam the next day, without having to pass the lesson, since they have multiple exercises with which to test.

It is used in more than 100 countries and can be used by teachers, parents and children

In how many countries is it used? What languages ​​is it available in?

Although at the moment only in Spanish the App is already used in more than 100 countries.

What advantage does this application provide over others?

Academons is the first Spanish educational game that offers the possibility of learning any Primary subject without leaving home and with the contents carefully adapted to the syllabus of each subject and each course.

There is no other similar App that offers such a wide range of courses, subjects and activities for children from 6 to 12 years old. This was demonstrated during confinement, when parents most needed this type of educational solution, Academons was a leader in downloads helping more than 400,000 families to learn during confinement.

It is the Spanish App for Primary with more educational activities, with more than 30,000 interactive games, all of them designed by expert teachers. There are no other Apps that cover so many courses, topics and subjects.

We also differ in that our focus is only on Primary. We are specialists in this school stage, to help parents with children from 6 to 12 years old, that is why all our experts are Primary Teachers.

“Helped more than 400,000 families to learn during confinement”

Academons is strictly adapted to the national curriculum: all content and learning itineraries have been created by teachers who have followed the Ministry of Education’s criteria topic by topic so that the activities coincide with what the children are learning in class.

Likewise, it also has reports for parents: parents receive personalized statistics in their email to know the evolution of their children in real time.

Academons was the most downloaded educational application in Spain during the pandemic, have you exceeded your expectations?

Before the COVID-19 crisis, we were growing at a rate of 40% per month, but as a result of the closure of educational centers, we observed how the number of downloads skyrocketed day after day. Only in the first week of confinement, there were more than 100,000 installations of the application in Spain. This means a 2,500% growth in just seven days. All thanks to word of mouth between parents and teachers who recommended our application to their closest environment.

As the weeks passed and the confinement extended through the countries of Latin America, the recommendations of our App among the educational community were causing the same effect in each country that was closing schools. At the end of May, more than 400,000 families were already learning with the app , making it the most downloaded educational tool in app stores in 18 countries around the world.

“We plan to enter new markets, such as the United States”

Do you have other future projects in mind? What are you working right now?

Looking ahead to this last quarter, we plan to launch the desktop version of Academons , completing the existing versions for tablet and mobile. Our goal is to offer a multiplatform solution that can be used both in schools and in homes to help parents keep their children from losing the pace of learning.

We also plan to enter new markets, such as the United States, and consolidate ourselves in others, such as Latin American countries, where during the pandemic we were the most downloaded review App and we want to continue being so with this 2021-22 academic year, to carry that digital, playful and autonomous education to millions of boys and girls around the world.