Fear Of A Debt Crisis As In The Seventies 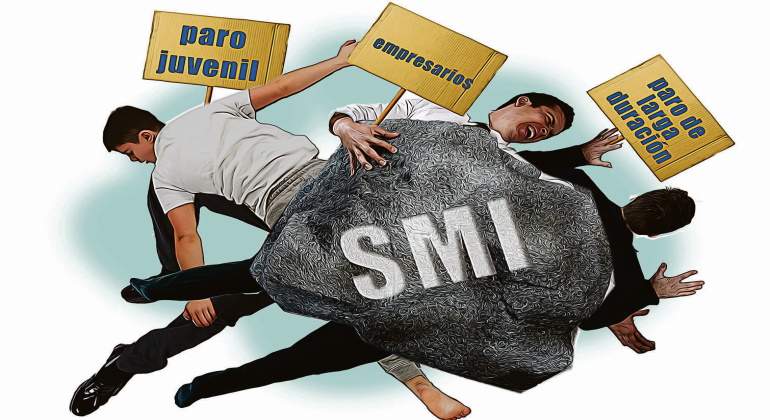 The Government was determined to approve an increase in the Interprofessional Minimum Wage (SMI) in the council of ministers this week. But he postponed it after realizing that the breakdown of social dialogue put at risk the negotiation of other essential aspects, such as the labor reform, the extension of the Ertes, which should be decided before the end of the month, or the increase in the social contributions to complete the second phase of the pension reform. The understanding that Sánchez has achieved with Garamendi can be ruined for a handful of euros.

Will the 15 euros average rise proposed by the second vice president, Yolanda Díaz, really change history ? , they ask themselves from the unions and the Government. Obviously not. But by the same rule of three, the measure will neither encourage consumption nor help to reactivate the economy. In a year in which electricity and raw materials are through the roof, generating inflation and reducing the competitiveness of companies, the SMI becomes the icing on the cake that fills the glass of difficulties.

A recent comparative study with Germany yields strong conclusions. While in Spain, the 22.3 percent increase in the SMI in 2019 resulted in less job creation or job destruction, which the Bank of Spain estimates between 90,000 and 170,000 people, in the Teutonic country there was a improvement of worker productivity in order to cover the costs, what are the reasons for these differences?

First, the German rise was a quarter of the Spanish one, 5.4 percent and therefore easier to absorb. Second, it is a country with full employment, while ours leads the unemployment rate in Europe.

If in Germany the SMI is equal to 45% of the average salary, why here will it exceed 60%?

The result will not translate into the creation of higher quality jobs, as Díaz predicts, but rather in the loss of opportunities, because companies will react by cutting their workforce or refusing to increase it. The Bank of Spain also shows that the groups most affected will be the hardest hit by unemployment: young people and those over 45 years of age.

The possibilities of job creation among young people, with rates above 40 percent, fell by six percent, while among people between 45 and 64 years old. the chances of losing your job increased 11 percent, as a result of the previous increase. Another very affected group are seasonal workers engaged in agricultural work. It can happen that the product of the harvest ends up unharvested because it is not profitable to do so.

Even the Minister of Social Security and Migration, José Luis Escrivá, who began his professional career in the research service of the Bank of Spain, acknowledges that the new rise in the SMI will cause job destruction , which he described as “moderate”, because in this time it is much less than in 2019.

But there are more reasons to discourage the measure at this time. The SMI already represents more than 50 percent of the average salary and the Government’s commitment is that it reaches 60 percent by the end of the legislature, that is, in 2023. A commendable objective from the social point of view, but very harmful from the business side if it is not accompanied by an improvement in worker productivity.

In Germany, where opportunities to improve pay are greatest due to full employment, the SMI represents only 45 percent of the median wage. Five points less, than the Spanish average and fifteen less below the goal to which Sánchez and Díaz aspire.

Sánchez blasts Aragonès in El Prat. But there will be no crisis, they will understand each other again

Raising the SMI by decree law will only contribute to a drowning of the groups most affected by the crisis, young people and the long-term unemployed, who already have the rope around their necks. It is the boomerang effect of the government’s socialist policies.

An agreement on the SMI should be accompanied by measures to increase productivity of around 1.5 million, as in Germany, to prevent them from becoming a heavy backpack, from which companies try to get rid of and pay fairly for sinners.

From the light fiasco to El Prat

The other workhorse is light. The Government gave carte blanche to the Third Vice President and Minister of Ecological Transition, Teresa Ribera, to explain it to the citizens. But the failure of their communication could not have been more resounding.

Ribera went to Congress, where he recognized that the light will rise 25 percent this year, to the surprise of Moncloa, where they put their hands to their heads. The Secretary of State for Communication, led by Francesc Vallés, tried to fix the mess with an interview by Sánchez to El País, the official newspaper, which they took this spring. The headline, cheered later by the rest of the media, was that the light will go up the same as in 2018. But the electricity sector hastened to deny it.

elEconomista gathered the sector this Wednesday in a conference in which the unanimous cry was that the rise in electricity will be inevitable in the remainder of the year and will continue during the first months of 2022.

Ribera’s announcement of launching alternative auctions for industrial groups or changes in wholesale auctions so that the PVPC rate is less dependent on gas, will not arrive in time to correct the course of prices , which this week set new records.

The last front opened by Sánchez is El Prat . The sudden suspension of the investment of 1,700 million planned for its expansion is a personal decision of the president, fed up with “the hesitations and blackmails of the Catalan Government,” according to sources close to it. With his strategy he seeks to distance himself from separatism and counteract the accusations of the PP, which rises like foam in the polls.

But he will have to handle the times of crisis with precision, because the president of the Generalitat, Pere Aragonés has sent him the message that he does not have the votes of his party in Congress. The Government has to approve the Budgets to maintain the European funds and, therefore, its presumption that it will exhaust the legislature.

“It is a conflict in which both parties are condemned to understand each other,” they say in nearby media. Business mediation, headed, on this occasion, by Foment del Trevall, by Josep Sánchez Llibre, will be key to resolving the conflict.

The secret plan of the ECB

The world begins to undo the monetary experiment that got us out of the 2008 depression and the Covid-19 crisis: massive injections of liquidity to avoid a lack of liquidity. But the recipes applied to both sides of the Atlantic differ. While the Federal Reserve is reluctant to withdraw stimulus after the bad employment data and will wait at least until the end of the year to see how the US economy evolves, Europe is beginning to take the first steps to reduce bond purchases.

The optimism of Christine Lagarde and Luis de Guindos , who revised European growth up by half a point for this year and next year, while reducing that of 2023, contrasts with that of Jerome Powell.

The United States is growing at rates of more than 5 percent in both prices and GDP. But while price forecasts are stable, Goldman Sachs cut growth for the second half by one point and warns of a sudden slowdown as early as next year, when its rate will fall to 1.5 or 2 percent, which That keeps Powell’s hounds awake.

Will the European economy maintain its cruising pace next year, with growth close to 5 percent, if the United States slows down? I doubt it. The ECB’s optimism is probably overstated.

But it has decided to put an end to the giant of European public and private debt , which threatens to escape the control of the states. The objective is to act little by little to avoid a radical withdrawal of stimuli that causes a debt crisis, coupled with high prices and low growth ( stagflation ) as happened in the 1970s. As you can see, despite appearances, the economy is not to shoot rockets.