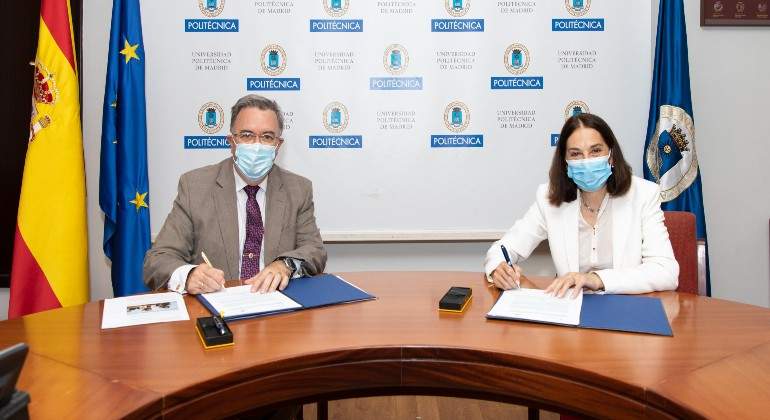 Aimed at promoting the digital economy in the new social context that opens after the pandemic, this Chair is constituted as a nucleus of debate, reflection and reference research on new information and telecommunications technologies (ICT) and their impact on the transformation of our society.

For Guillermo Cisneros, rector of the UPM: “this renewal of the agreement of the Chair responds to the close and fruitful relationship that both institutions have maintained for decades, which is based on the trust placed by Telefónica in the Polytechnic University of Madrid for the firm commitment in new technologies and digitization to align our training and research offer with the demands of the labor market and current society “.

Spain is the European Union country where the base of companies that hire ICT specialists has grown the most : 117% between 2012 and 2020. According to Eurostat, in the last five years 195,000 jobs have been created in Spain with STEM students (Sciences, Technology, Engineering and Mathematics).

If we take into account that digitization will create more than 200,000 jobs in Spain and will generate 45 percent of job opportunities, it is necessary to work to break this imbalance generated by the unemployment problem and align the training offer at the University with the demands of the labor market.

For Beatriz Herranz, director of the Territory Center at Telefónica: “the University-company relationship (RUE) must be strengthened and therefore, from this Chair, we also intend to promote this talent that students have at the University, since they are called to lead the new digital era.

In addition, at Telefónica we are firmly committed to practical and differential training that promotes the knowledge of our students and links them with their profession from day one. It is a responsibility with this new generation of young people to spread the benefits of digitization leave no one behind. “

Through figures such as this Chair, the University – company (RUE) relationship acquires special prominence today as it has become a key element in the innovation policies promoted by many governments and implemented by companies.

Since its creation, this Chair has been meant in recent years by promoting early entrepreneurship in students through initiatives such as HackForGood , the largest national hackathon that brings together some 1,000 students year after year along with a score of universities in ten Spanish cities, and that in 2022 it will be 8 years old. Many multidisciplinary teams have emerged from it and have set up their own startup, companies that today are part of our economic and industrial fabric.

On the other hand, the Chair was a pioneer with the first MOOCS (Massive Online Open Courses) in Spain, thanks also to Telefónica’s Miríadax platform and the encouragement of one of the Chair’s directors, Professor Juan Quemada: “Only in the first edition of the MOOC in 2013 I had about 12,500 students, more than in my entire professional life in the classroom.

And in the 12 editions offered to date, there are more than 200,000 registered students and it is the most followed course of UPM and the Miríadax platform, without which it would have been impossible to achieve this impact “.

Similarly, and adding to the European micro-credential model, the UPM and Miríadax mark a milestone by offering the first Fullstack Web Development itinerary with JavaScript and Node.js, endowed with an official degree and with 9 ECTS credits,

Last year the Chair presented the report “The digital future of Europe”, produced by the Polytechnic University of Madrid through the Chair together with the Elcano Royal Institute, all under the direction of the other director of the Chair, Professor Jorge Pérez , a reference report that was presented in the Fundación Telefónica Space and in which the spokespersons of the Committee on Economic Affairs and Digital Transformation of the Congress of Deputies participated, as well as the General Director of Communication Networks, Content and Technology of the European Commission, among others.