Isabel Díaz Ayuso Invested With The Votes In Favor Of Vox 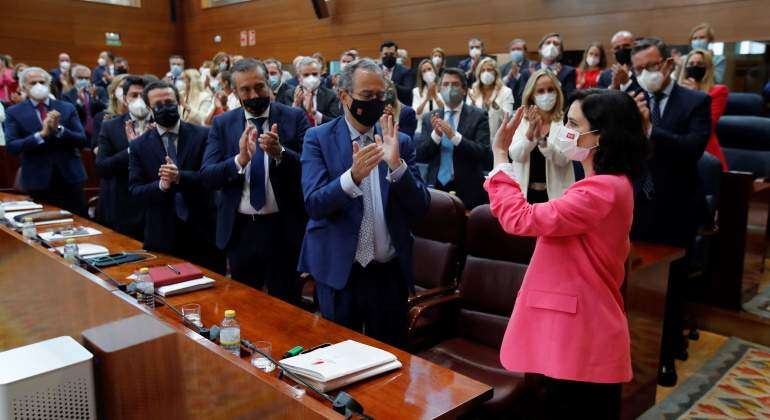 Isabel Díaz Ayuso has been invested as the new president of the Community of Madrid, thanks to the 77 deputies that make up the Popular Party and Vox and despite the vote against the PSOE, Más Madrid and Unidas Podemos.

The Assembly of Madrid has hosted this Thursday and Friday the plenary session after the call for early elections on May 4, as a result of Ayuso’s break with Citizens.

On the first day of the debate, the ‘popular’ rehearsed, during almost two hours of speech, the main policies that her government will implement. Among the almost fifty announcements that he made, three stand out: tax reduction for the income campaign 2022 , a plan for decarbonization and against climate change and the implementation of economic aid for maternity for women under 30 years of age.

In addition, true to herself, Ayuso defended that she will shield the freedom that exists in Madrid and claimed that the region has become “the first wall where the policies of the central government crash, which are making Spain a broken country, groped by the independentistas and without partners in the international community “.

In the second session, Monastery has kept its word to give its votes to the president so that they can begin “to work as soon as possible because precious time has been lost.” Despite the fact that he has said on numerous occasions that he gave his votes “for free”, today the leader of Vox has shown some of his demands such as repealing the LGTBI laws in force in the Community of Madrid and closing Telemadrid.

He has said that they are open to collaborate as long as they respect their voters and their political agenda. “We certainly respect his people and their program, although we differ in many aspects. We are very different political forces. We have different positions but that should not be an insurmountable obstacle to reach the agreements that Madrid residents need,” he declared.

“His government is born, but a fierce opposition is born”
The three spokesmen of the left (Más Madrid, PSOE and Unidas Podemos) have advanced in their interventions that their formations would position themselves against Ayuso reaching the Presidency.

The spokeswoman for Más Madrid, Mónica García, has indicated that today “his government is born” but also “a fierce opposition is born” before him. “I imagine you have noticed, but from today I sit in front of you,” he said.

For her part, the PSOE spokeswoman, Hana Jalloul, has defended the position against her group because she considers that the ‘popular’ has turned the region into “a set”, has made the confrontation “its hallmark” and it has put the institutions “at your service and not the other way around.”

The spokeswoman for United We Can, Carolina Alonso, believes that the now president has turned the regional government into a “propaganda apparatus” under a great “factory of lies” and has shown her “disagreement and concern” that it will be again the one that directs the Madrilenians.

The regional leader will take office tomorrow morning, at 12 noon, at the Royal Post Office, headquarters of the Madrid Government, and it will be on Monday when the new Executive Councilors do so. That day the first Governing Council of the XII Legislature will take place.